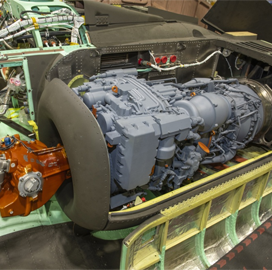 General Electric's aviation business has reported design, development and demonstration milestones for its aircraft engines over the past year in line with the U.S. Army's Future Vertical Lift program.

The Army's Aviation and Missile Center also deployed the company's T408-GE-400 engine aboard the Boeing-built CH-47 Chinook heavy-lift helicopter in September as part of a cooperative research and development agreement.

GE additionally noted that it is working with Lockheed Martin's Sikorsky subsidiary to integrate the GE YT706 engine into the S-97 Raider coaxial helicopter.

Other efforts that GE highlighted include another partnership with AvMC to test two of the company's engines for the Future Affordable Turbine Engine program, which seeks to deploy a turboshaft engine with up to 10K-shaft horsepower capacity.

Christin Rauche, executive for GE Aviation's connected aircraft segment, said the company will work to build a health awareness platform for onboard maintenance to comprehensively visualize the operational availability of  Army aircraft.