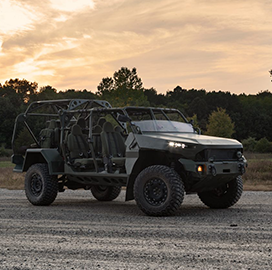 The 5K-pound ISV platform is derived from the midsize Chevrolet Colorado ZR2 truck, features a rollover protection system and can be carried by a UH-60 Black Hawk or CH-47 Chinook helicopter, General Motors said Tuesday.

GM Defense, which its parent company relaunched in 2017, will build 649 ISVs as part of its contract with the Army and could help the branch produce up to 2,065 vehicles over eight years with additional appropriations.

Ricardo Defense received a subcontract in January to provide integrated product support to the ISV program.