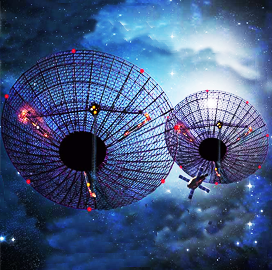 Raytheon Technologies' intelligence and space business segment is conducting research on quantum radars that could help detect, identify and track satellites and other manmade objects in Earth's orbit to improve space domain awareness.

The study seeks to improve the performance of radar systems through quantum entanglement, the company said Monday.

“It's possible to create entanglement by splitting a laser beam of photons in two,“ said Darin Koblick, senior engineering fellow for space and C2 systems at Raytheon Intelligence and Space. “Half the photon beam can be sent out as a signal and the other half could stay within the sensor. These entangled signal photons are likely to hit something, like a target, and bounce back toward the sensor.“

“Small satellites are difficult to detect because of their small cross-sectional area, reflectivity, and environmental lighting conditions,“ Koblick said. “Quantum entanglement could enhance our sensitivity so we can detect smaller objects and provide better resolution, both primary drivers for persistent space domain awareness beyond near-Earth.“