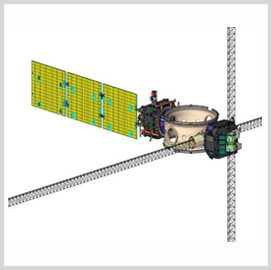 The Demonstration and Science Experiments satellite of the Air Force Research Laboratory performed the first space-to-space very low frequency transmission within three months of its launch during a coordinated experiment with the Japanese Space Agency’s Arase spacecraft.

William Robert Johnston, physicist and DSX principal investigator, said Arase detected the DSX signal when they were more than 400 kilometers away from each other during the experiment.

“Right now, DSX is conducting a campaign to see what happens with transmissions when we vary the angle between the antenna and the Earth's magnetic field at DSX's location. DSX has conducted experiments on adaptive control of the motion of this large structure, providing results that will help future missions using large assemblies,” Johnston said.

DSX has an 81-meter antenna and is built on a spacecraft platform developed by Sierra Nevada Corp. The satellite is intended to support multiple experiments, including wave particle interaction and space weather experiments.

“The results we’ve gathered from the DSX satellite will enable future predictive capabilities of this environment on short timescales such as weather forecasts on Earth and long-term trends or climatology,” Johnston said. Since the radiation belts are a danger to spacecraft and astronauts, our research will improve spacecraft and spaceflight safety and reduce the costs of dealing with this hazard.”

AFRL expects DSX experiments to continue through May 2021 with joint experiments with Canada’s CASSIOPE satellite and Japan’s Arase.