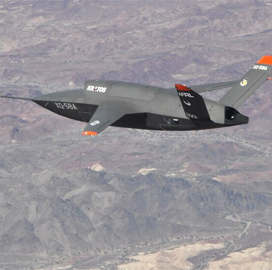 F-22 and F-35 aircraft flew alongside the autonomous Valkyrie during the test flight to exhibit a potential low-cost military UAS for manned-unmanned teaming.

Michael Wipperman, program manager for the XQ-58A at AFRL, said the UAS demonstrated 80 percent of what the test was meant to exhibit.

“This was just a first step at demonstrating the potential of the force multiplier effects of attritable aircraft in a manned/unmanned environment," said Brig. Gen. Heather Pringle, AFRL's commander.

USAF envisions the use of low-cost attritable aircraft that can be reused with minimal maintenance needs. Kratos developed XQ-58A over two and a half years before the test flight.