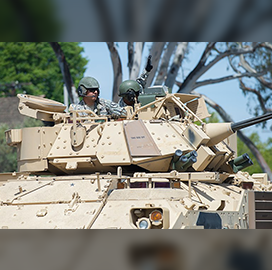 The U.S. Army has released a request for proposals for the concept design phase of the Optionally Manned Fighting Vehicle program aimed at deploying a replacement to the service branch's Bradley infantry vehicles.

In a notice posted Friday on the beta SAM website, the Army said the RFP covers OMFV Phase II activities such as modeling, simulation and analysis work throughout a 15-month performance period.

The Army plans to issue five firm-fixed-price contracts for the design phase which will include technical data package assessments and culminate in a system functional review.

According to a recent Defense News report, the Army plans to begin OMFV testing somewhere between fiscal years 2026 and 2027 ahead of full-rate production work in FY 2030.

In July, the Army released the draft RFP for the program's initial design phase after announcing plans to relaunch the program in line with industry feedback.

The service released another RFP in September to source OMFV components including ethernet systems, electrical storage systems and propulsion technologies.

FLIR Systems is also working with Textron to offer the Ripsaw M5 sensing technology for the next-generation combat vehicle concept.