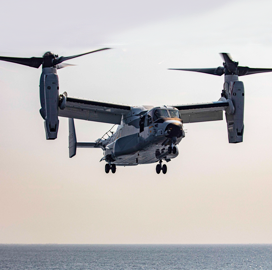 The task order will cover pre- and post-flight activities, inspection, disassembly and repair services for the multirole aircraft and its associated equipment, the company said Saturday.

PAE initially secured a spot on the potential $11.4B USAF Contract Field Team Services indefinite-delivery/indefinite-quantity contract in 2016 for the provision of support services to the Department of Defense's weapon systems.

Work under the task order is scheduled to run through December 2023 and will take place at U.S. Marine Corps Air Station Futenma in Japan and Marine Corps Base Kaneohe Bay in Hawaii.

The company seeks to extend its footprint in the Pacific region through the task order.