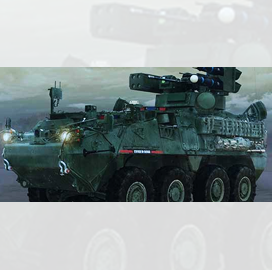 Leonardo DRS secured an initial award under a five-year contract valued at more than $600 million from General Dynamics' land systems business to manufacture 28 mission equipment packages for an air defense system being developed by the latter for the U.S. Army.

The technology will also house a Reconfigurable Integrated-weapons Platform turret built by Moog along with an M240 7.62mm machine gun, an XM914 30mm cannon and Hellfire and Stinger missiles.

The delivery of Leonardo DRS MEPs to General Dynamics Land Systems will start in 2022 in preparation for their integration into Stryker vehicles.

GDLS received a potential $1.22 billion Army contract in 2020 to build and test IM-SHORAD systems. The service branch tapped the company as the platform integrator for the project.