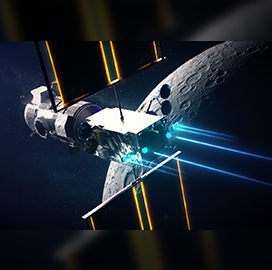 NASA and Maxar Technologies have reviewed programmatic and technical requirements for the power and propulsion element of the agency's planned Gateway base on the moon.

Reviews of the PPE delta system requirements and tailored system definition happened virtually and sought to ensure that the company will stay on track to develop the system that will support communications and command functions on the lunar outpost, Maxar said Tuesday.

The company received a $375 million contract in May 2019 to manufacture and demonstrate the PPE module and completed a full system requirements review in the same year.

NASA added program conditions last year to require the element's integration with a habitation and logistics outpost module from Northop Grumman in the ground-based assembly phase to facilitate simultaneous launch of both platforms through a commercial heavy-lift rocket.

The PPE is scheduled to undergo a preliminary design review during the first half of this year to evaluate the system against mission requirements before the agency conducts the final design assessment and grants fabrication clearance.

Maxar noted the upcoming assessment will serve as the third of the mission's six key milestones.