Executive Mosaic is pleased to recognize Gen. Paul Nakasone — commander of the U.S. Cyber Command, director of the National Security Agency and chief of the Central Security Service — as a recipient of the 2021 Wash100 Award for helping the U.S. military branches increase their agility across the cyber domain.

This represents his fifth consecutive Wash100 Award for Nakasone, who started his current roles in May 2018 after leadership work at the U.S. Army Cyber Command (ACC) where he oversaw military and mission force initiatives in cyberspace.

“Gen. Nakasone has a distinguished career and has been indelibly synonymous with our country“™s cyber protection since 2016 as the Commander of the U.S. Cyber Command,“ said Jim Garrettson, CEO of Executive Mosaic and founder of the Wash100 Award.

He co-hosted the Sept. 3 opening ceremony for the ARCYBER headquarters at Fort Gordon in Georgia and highlighted the command“™s strong partnerships with NSA/CSS and academic institutions during his speech at the event.

“Due to the partnerships that ARCYBER built and nurtured to date, the Army“™s operational and institutional cyber forces enjoy unprecedented synergies, operating from a single, information power projection platform,” Nakasone said at the time.

Nakasone, speaking at the Sept. 16 Intelligence and National Security Summit, noted that information operations and warfare activities enabled by technology could potentially influence diplomatic processes across the globe.

“I think influence operations just in general will be for us, one of the things that we“™ll be dealing with not just every two or four years, but this is the competitive space that we“™re going to be in as intelligence agencies and as our nation.“

The Army general wrote in a joint commentary with Michael Sulmeyer, former cyber project director for the Harvard Kennedy School’s Belfer Center, that the U.S. military needs a “defend forward“ approach in the fight against sophisticated cyber threats to the national economy and security.

“U.S. cyber forces should continue to be more proactive and implement the strategy to contest our adversaries“™ malicious activity online. But our actions must also remain consistent with the law of armed conflict and other important international norms,“ Nakasone and Sulmeyer noted in their August commentary published on Foreign Affairs.

Nakasone helped the Department of Defense (DOD) and federal law enforcement agencies secure the 2020 elections against nation-state actors that were attempting to interfere in the country“™s voting process.

Amid the COVID-19 pandemic, he prioritized resilience to carry out no-fail missions and worked to ensure the safety of his organizations“™ workforce through the use of technology such as the DOD“™s Commercial Virtual Remote Enterprise system.

“We are working in the midst of a pandemic, and we’re working with a population that is very, very comfortable operating in this type of space,” he said during a July webinar hosted by the Association of the United States Army.

Those efforts included the establishment of DreamPort, a collaboration venue built in partnership with the Maryland Innovation and Security Institute; creation of the Command Acquisition Executive position to oversee cyber technology contracting efforts; and the development of the Joint Cyber Warfighting Architecture.

Executive Mosaic congratulates Paul Nakasone and the NSA and Cybercom teams for their selection to receive this award.

This year represents our eighth annual Wash100 Award selection. The Wash100 is the premier group of private and public sector leaders selected by Executive Mosaic“™s organizational and editorial leadership as the most influential leaders in the GovCon sector. These leaders demonstrate skills in leadership, innovation, achievement and vision.

Visit theWash100 site to learn about the other 99 winners of the 2021 Wash100 Award. On the site, you can submit your 10 votes for the GovCon executives of consequence that you believe will have the most significant impact in 2021. 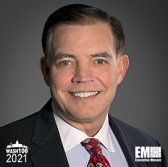