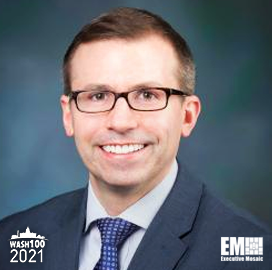 Executive Mosaic, the leading provider in connecting, promoting and branding government and government contracting (GovCon) executives of consequence, is pleased to announce that Chris DeRusha, the new federal chief information security officer (CISO) for the Office of Management and Budget (OMB) under the Biden administration, has received his first Wash100 Award.

This marks the first Wash100 Award win for DeRusha. He has earned the most prestigious award in all of government contracting (GovCon) for his leadership as federal CISO and his initiatives to advance cybersecurity capabilities for our nation“™s national security while also forming partnerships with other federal agencies and key executives in the coming years.

Visit Wash100.com to cast a vote for Chris DeRusha as the most significant executive of consequence to the GovCon sector. Cast your TEN votes TODAY to advocate your favorite leaders in the federal and government sectors. The elite leader with the most votes by April 30th will be recognized by the GovCon community as the industry“™s most influential member.

Following President Biden“™s inauguration in Jan. 2020, he appointed DeRusha as federal chief information security officer (CISO) for the OMB. He succeeded Camilo Sandoval in the role and will bring his extensive experience in cybersecurity to drive its policy, development and implementation efforts for the Biden administration to ensure the advancement of our nation“™s cyber capabilities and prevent future cyber attacks.

“The Biden-Harris administration has made cybersecurity a top priority, and Chris is well prepared to elevate it as an imperative across the government,“ an OMB spokesperson said following DeRusha“™s appointment in Jan. 2021.

“A seasoned cybersecurity expert with strong public and private experience, Chris will manage and recruit a talented team of civil servants to launch the most ambitious effort ever to modernize and secure federal information technology and networks, and help put the U.S. government back on the path towards leading 21st century cybersecurity.“

Former Federal CISO Grant Schneider advocated for DeRusha and praised his appointment as a crucial move to establish a strong partnership between OMB and the Department of Homeland Security (DHS) to tackle the highest priority challenges facing federal agencies such as supply chain management, transitioning from network-based security to be data-focused in the future.

Prior to his role as Federal CISO, DeRusha served the Biden administration as its CISO and acted as a member of its Technology Strategy and Delivery Team between June 2020 and Dec. 2020. In addition, he also worked as a White House cybersecurity official for the Obama and Trump administrations between June 2015 and May 2017.

Recently, DeRusha also served the Department of Technology, Management and Budget for the State of Michigan in an ascending number of important roles. He was appointed by the state as deputy chief security officer from April 2018 until Nov. 2018 when he was appointed the acting chief security officer. He held the position as the acting CSO before taking on the role on a permanent basis in Feb. 2019 and holding it until June when he joined the Biden administration.

Before joining OMB, DeRusha served DHS for almost six years. He came into the department as the special assistant to the Deputy Secretary between Nov. 2009 and April 2011 before he became a DHS cybersecurity strategist until June 2014. For his last year with DHS, he served as the advisor to the Deputy Under Secretary for Cybersecurity.

Executive Mosaic would like to congratulate OMB and Chris DeRusha for his leadership and vision for the future of cybersecurity for our nation. His work will be pivotal to the development of our nation“™s cyber advantage in the global market as well as our nation“™s national security as a whole. 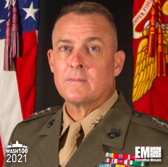