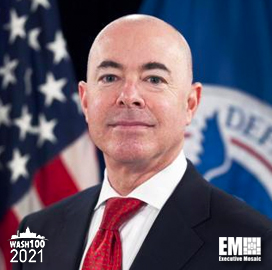 Executive Mosaic is thrilled to announce that Alejandro Mayorkas, secretary of the Department of Homeland Security (DHS), has been named a recipient of a 2021 Wash100 Award, the most prestigious and respected award in all of government contracting (GovCon).

This marks the first time that Mayorkas has won the Wash100 Award for his contributions to the federal sector and GovCon industry. He's received the award for working to advance the cyber spending and technical capabilities to protect our nation's national security as well as drive new capabilities for the DHS workforce.

After receiving the nomination from President Biden, Mayorkas was sworn in as the first Latino and immigrant to become the U.S. DHS secretary in the history of the United States. He brings a distinguished 30-year federal career to the role as well as extensive experience in private law practices and as a law enforcement officer.

Prior to his official DHS secretary appointment on Feb. 2nd, Mayorkas served as the deputy secretary for DHS between 2013 and 2016 and as the director of U.S. Citizenship and Immigration Services (USCIS) from 2009 until 2013.

Out of the gate as DHS Secretary, Mayorkas made his intentions clear to “ensure that our immigration system represents the empathy of the American people.“ On the issue, he has urged Congress to support President Biden’s legislative proposals in order to update our nation's citizenship and border management processes.

Mayorkas has also been quite vocal regarding the drive for success across the department, which he has stressed will involve providing DHS employees with the essential tools they need to be as effective in their roles and drive success for the entire department.

“If indeed I have the privilege of serving as the secretary of Homeland Security, I will make the well being and morale of the brave and noble men and women of the department my highest priority,“ Mayorkas said at his nomination hearing before the Senate Homeland Security and Governmental Affairs Committee.

More specifically, Mayorkas has addressed cybersecurity initiatives for DHS and his plans to improve the department's cyber posture. In Feb. 2021, Mayorkas announced that DHS would raise the required minimum of cybersecurity spending for the Federal Emergency Management Agency (FEMA) grant awards from 5 percent to 7.5 percent. That reflects a $25 million increase across the U.S.

“[CISA] must strengthen the public-private partnership, not only for the benefit, of course, of the federal government, but for the benefit of the private sector itself,“ Mayorkas said.

He stressed that DHS has already begun to assess and implement additional capabilities, which includes addressing ransomware issues and building a “more diverse, equitable, and inclusive cybersecurity workforce“ that also works to improve the security of our nation's industrial control systems.

Executive Mosaic congratulates Alejandro Mayorkas for receiving his first Wash100 Award win of his long and celebrated career. His contributions to the federal sector have demonstrated many years of excellence that have established him as one of the most significant executives of consequence to the GovCon industry and federal sector as he makes history with DHS in 2021.

Visit Wash100.com to cast a vote for Alejandro Mayorkas as the most significant executive of consequence to the GovCon sector. Cast your TEN votes TODAY to advocate your favorite leaders in the federal and government sectors. The elite leader with the most votes by April 30th will be recognized by the GovCon community as the industry's most influential member.

This year represents the eighth annual Wash100 award selection. The Wash100 is the premier group of private and public sector leaders selected by Executive Mosaic's organizational and editorial leadership as the most influential leaders in the GovCon sector.

These leaders demonstrate skills in leadership, innovation, reliability, achievement, and vision. Visitors to Wash100.com can sign in and vote for the executives they believe will have the greatest impact on government contracting in the coming year.

The media team at Executive Mosaic writes individualized articles for each recipient of the Wash100 award, providing a write up on the executive centered around their career history and highlights.