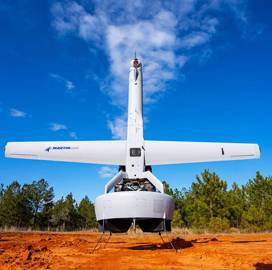 Martin UAV said Tuesday that the V-BAT 128 UAS has the capacity for rapid assembly, vertical hover and flights of up to 20,000 feet.

The platform, which has a 9.7-foot wingspan, can also carry 25 pounds of interchangeable payloads and operate for a maximum of 11 hours.

Previously, Martin UAV concluded a demonstration of V-BAT as part of the U.S. Army's Expeditionary Warrior Experiment which took place for several weeks.

Heath Niemi, chief development officer at Martin UAV, said the company is looking forward to broadening the market for V-BAT to support various other mission needs.