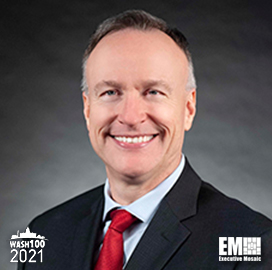 Executive Mosaic is honored to present Chris Brady, president of General Dynamics Mission Systems, as a 2021 Wash100 Award recipient for driving the business unit's growth by leading valuable industry partnerships and securing profitable contracts, which has expanded GDMS' influence in the federal marketplace.

This marks Brady's second consecutive Wash100 Award. He received his 2020 Wash100 Award for his work to advance and innovate enterprise data, infrastructure systems and defense programs to help and protect federal agencies, military customers and our nation's security and defense.

Brady has leveraged his momentum throughout the year to drive General Dynamics' business unit to achieve further growth, as well as expand GDMS' offerings to the federal government. In the beginning of 2020, GDMS was awarded a valuable, $883 million contract to support the Army Consolidated Product Line Management Plus (CPM Plus) Program.

“Modernizing the training experience is one of the Army's six modernization priorities,“ said Brady. “This award increases the viability, relevancy, and alignment of the Army's current live training systems while bridging to the future Synthetic Training Environment that will be delivered to soldiers worldwide.“

In addition to the massive contract GDMS has secured throughout 2020, Brady has also worked with industry partners to advance and develop new offerings for federal customers. In Sept. 2020, GDMS made a strategic counter-drone partnership with Dedrone, providing General Dynamics’ global network with access to Dedrone’s complete drone detection and defeat technology.

“The intrusion of private and restricted airspace by unmanned aerial systems is one of the fastest-growing threats facing our customers, and Dedrone’s counter UAS technology platform is the market-leading solution to defeat those threats,” said Brady. “We’re excited to partner with Dedrone to provide counter-drone capabilities to our global customer base.“

Through the strategic relationship, the TACLANE-Nano (KG-175N) Type 1 encryptor has successfully integrated into the Klas Voyager System. This integrated kit provides reliable, high performance and secure communications to the battlefield.

Moving into 2021, Brady's leadership has continued to bolster GDMS' position in the government contracting (GovCon) sector. In the beginning of the year, the business unit announced that the U.S. Navy awarded GDMS a $43.2 million award to support the Columbia and Dreadnought ballistic missile submarine class.

Under the contract modification, GDMS will support development, production and installation requirements of the submarine class. The business unit will also deliver fire control systems for the Navy's first Columbia class submarine, as well as the first U.S. Columbia class training facility. GDMS will provide installation support and pre-deployment planning for both U.S. and U.K. sites.

Executive Mosaic congratulates General Dynamics Mission Systems and Chris Brady on receiving his second Wash100 Award in 2021. His efforts will continue to advance technological capabilities for U.S. military branches, federal agencies and the GovCon industry throughout the new year.

Visit Wash100.com to cast a vote for Chris Brady as the most significant executive of consequence to the GovCon sector. Cast your TEN votes TODAY to advocate your favorite leaders in the federal and government sectors. The elite leader with the most votes by April 30th will be recognized by the GovCon community as the industry's most influential member.

An Ultra Electronics subsidiary has received a potential five-year, $69.8 million contract to produce and supply transducers and installation kits to the U.S. Navy. The Naval Undersea Warfare Center Division in Newport, Rhode Island, is the contracting activity and awarded the indefinite-delivery/indefinite-quantity contract to Ultra Electronics Ocean Systems through a full and open competition.