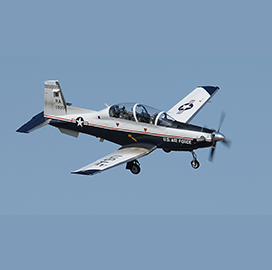 Scientific Research Corp. has awarded Curtiss-Wright a contract to supply flight data and cockpit voice recording devices as part of a project to modernize the joint U.S. Air Force and Navy trainer fleet.

The Air Force and the Navy use T-6A to train student pilots in primary and intermediate flying skills.

Fortress works with military fixed- and rotary-wing aircraft and consists of black boxes, an independent power supply device and a data acquisition technology.

The compact system is designed to also generate data for post-flight analysis, pilot training and safety programs, according to Curtiss-Wright.

In January, Curtiss-Wright and Honeywell received certification from the European Aviation Safety Agency for a 25-hour cockpit recording system that was built on the Fortress CVR technology.