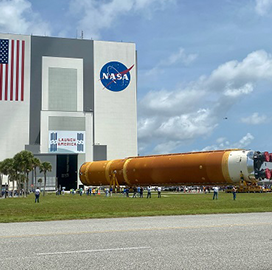 Boeing has delivered the final piece of hardware that will complete NASA’s Space Launch System rocket intended to launch Artemis I, an uncrewed mission to the moon with the Orion spacecraft.

The Pegasus barge ferried the company-built SLS core stage to the Kennedy Space Center in Florida for integration with a cryogenic upper stage, twin boosters, a stage adapter and the exploration vehicle, Boeing said Thursday.

Personnel from NASA's Exploration Ground Systems program and its contractor Jacobs will work to connect rocket components inside the Vehicle Assembly Building as part of launch preparations.

Jacobs noted it will oversee assembly, final tests and checkout processes for the Orion-SLS mission.

NASA aims to land the first woman and first person of color on the lunar surface through the Artemis program, which will demonstrate a series of moon exploration efforts and serve as a waypoint for potential missions to Mars.

Boeing said that assembly of the Artemis II core stage is underway as the company manufactures Artemis III components.