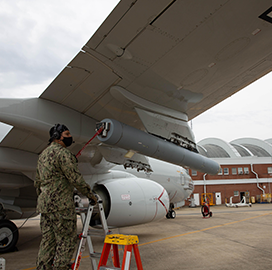 The U.S. Navy has demonstrated the airworthiness of a BAE Systems-made prototype of a technology meant to provide the P-8A Poseidon aircraft with radio frequency missile defense.

The Navy's Maritime Patrol and Reconnaissance Aircraft Program Office worked with other technical teams to run the RFCM project.

BAE Systems developed the suite of additional internal equipment of the RFCM pod under an other transaction authority award.

The team then brought the pod to Naval Air Weapons Station China Lake in California for effectiveness testing, which ran from March 21 to 26.

The technology will undergo system-level testing in preparation for platform integration and fielding activities planned for the future.

If you're interested in the U.S. Navy then check out the Potomac Officers Club's 2021 Navy Forum coming up on May 12. Click here to learn more.