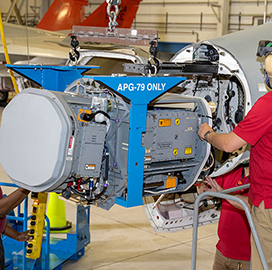 The U.S. Marines Corps has received a Raytheon Technologies-made prototype radar that the service branch plans to use for early flight testing with its F-18 Hornet aircraft.

The company said Thursday it delivered a prototype of the APG-79(V)4 radar, a scaled variant of the APG-79 active electronically scanned array designed for detecting and tracking enemy aircraft more accurately than the older APG-73 technology.

The new fire control radar is also fitted with transmit/receive modules based on Gallium Nitride technology.

USMC will conduct test flights of the APG-79(V)4-equipped Hornet to assess the aircraft's performance. The new detection technology is planned to be integrated into the service branch's Hornet fleet.

Raytheon will commence AESA radar delivery in December under an $83.6 million production contract.