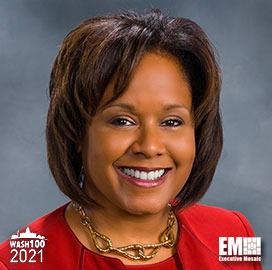 Executive Mosaic is pleased to introduce Stephanie Hill, executive vice president of rotary and mission systems for Lockheed Martin, as a recipient of the 2021 Wash100 Award for leading the business segment as it continues to secure multimillion dollar contracts from the U.S. military for missile delivery, update and support services.

This represents Hill's second time being recognized with a Wash100 Award. She was first presented with the most prestigious award in all of government contracting (GovCon) in 2015 for her leadership and her efforts for science, technology, engineering and mathematics (STEM) advocacy.

“We must capture the imaginations of the future scientists, engineers and innovators who will change the world – especially those who are not yet interested in and/or doubt that a STEM career is possible for them,” said Hill in her interview with ExecutiveBiz following the receipt of her first Wash100 Award.

In another interview, Hill explained in Sep. 2020 that the U.S. is experiencing a "critical shortage of STEM workers" and that the industry is in need of top talent in engineering and science. "We have to encourage as many young people as possible to pursue STEM careers," she added.

The executive noted that African Americans, Latinos and others are underrepresented in the STEM fields. She wants to encourage them to pursue opportunities in the said fields, claiming that "careers in STEM are incredibly exciting and rewarding.”

Hill has held positions of increasing responsibility at Lockheed during her decades-long stay supporting the company. She was vice president and general manager of the civil product line within Lockheed's Information Systems and Global Solutions before the segment was separated from the company and merged with Leidos in 2016.

In her current role as Rotary and Mission Systems EVP, Hill supports the $16 billion gross enterprise employing 34,000 people who work on over 1,000 programs, including helicopters, integrated air and missile defense, littoral, undersea and electronic warfare, cyber products and training and logistics systems, in support of the defense, intelligence, civil, commercial and international military customers.

In early 2020, Lockheed RMS won a five-year, $233M U.S. Navy contract to deliver Mk 41 Vertical Launching Systems to the service branch and to South Korea, Finland and Germany as part of the foreign military sales program. The contract also provides for supply modernization kits and spares for the launchers.

Aside from supporting Lockheed RMS, Hill mentors company professionals and students and promotes STEM education. She also serves on the board of directors of S&P Global and the board of visitors for the University of Maryland, Baltimore County.

Visit Wash100.com to cast a vote for Stephanie Hill as the most significant executive of consequence to the GovCon sector. Cast your TEN votes TODAY to advocate your favorite leaders in the federal and government sectors. The elite leader with the most votes by April 30th will be recognized by the GovCon community as the industry’s most influential member.

Executive Mosaic congratulates Stephanie Hill and the Lockheed RMS team for their induction to the 2021 Wash100 Award. Hill’s contributions to her team, company and sector demonstrate the level of professionalism and excellence that can only be recognized by the Wash100 Award in the GovCon industry.