Collins Aerospace, a business unit of Raytheon Technologies, has invested $18 million to build a wind tunnel in Rockford, Illinois, as part of efforts to simplify the process for testing ram air turbine products.

Work is underway on the test platform at Collins' center of excellence for electric power systems and the new structure is scheduled to be operational in the summer of 2022, the aerospace technology provider said Wednesday.

The new tunnel facility will feature a fan with a wind speed of up to 170 knots to generate a simulated loss of power scenario in flight.

RAT offerings include a self-governing tool designed to support the emergency power system of military or commercial aircraft by deploying itself from the wing or fuselage and extracting power from the airstream through the rotation of its small turbine. 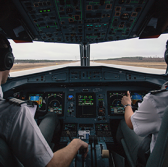