A Novetta–SimpleSense team gave a sneak peek of the system both companies are developing to help the U.S. Air Force secure operations at Tyndall AF Base in Florida.

The industry team won a 36-month, $9 million other transaction agreement in September 2020 to build the IROC system of systems designed to support Tyndall's maintenance and situational awareness efforts.

USAF noted the partnership will integrate a dozen technologies into a military internet-of-things platform and produce a virtual hub that will process internal and external data such as building controls, occupancy and gun fires.

“The IROC will be tied into the Base Defense Operations Center, or BDOC, to act as the central nervous system for integrated defense and emergency management operations,” said Maj. Jordon Criss, 325th Security Forces Squadron commander.

“We will use the technology to rapidly enhance the situational awareness for all emergency responders during complex and dynamic contingencies to best preserve life and protect critical assets by increasing the speed and accuracy of our decision-making process."

Tyndall's rebuild team expects the complete prototype to be operational by September 2023. 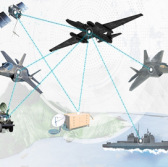