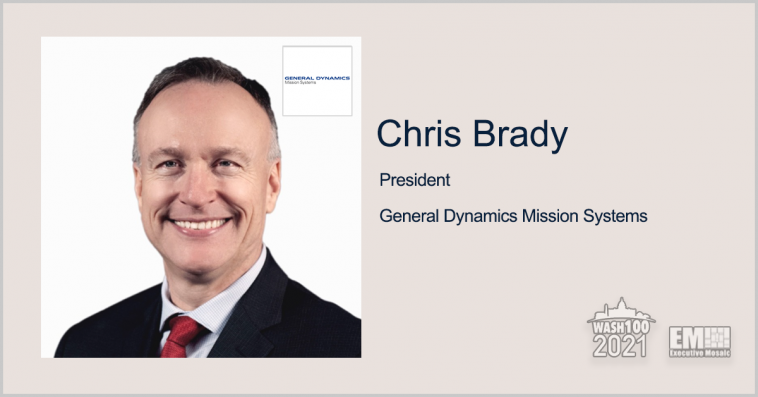 During the interview with ExecutiveBiz, Brady discussed his growth strategy for GDMS, new advancements and enhancements to the latest intelligence initiatives, some of the specific challenges on the business side of innovation and IT modernization as well as the problems that are being addressed with our nation’s national security, data management and drone threats.

“As drones become more sophisticated and more readily available, the defense required for our critical infrastructure is going to require something that is much more affordable and scalable than what is currently used out in theater for defending against airborne threats.”

You can read the full Executive Spotlight with Chris Brady below.

ExecutiveBiz: As you work to continue to drive new advancements, solutions and growth for General Dynamics Mission Systems, what is your growth strategy for the company and what do you hope to accomplish for the rest of 2021 and beyond?

“Despite the recent flattening of defense budgets, we’re growing and expect to continue to do so. First of all, we believe the best growth strategy starts with meeting and beating our commitments, and we’ve focused on that over the last couple of years. I can say that we have retained or improved our position on many fronts just by incrementally and reliably delivering capabilities.

The second is focusing on investments carefully. We have a broad portfolio of missions, technologies and customers across all the services, Intelligence Community (IC) and international customers. Even in those parts of the Department of Defense (DOD) and the IC that have declining budgets, certain capabilities must continue to improve and they’ll get their attention.

We’re focused on things like electronic warfare, assured position, navigation and timing, communications that are anti-jam with low probability of detection, and our nation’s strategic deterrent. Those are areas that continue to get the kind of support they need, as far as budgets go, to sustain and grow.

Finally, we’ve improved upon our agility in early prototyping and delivery in this new acquisition environment. Especially with other transaction authority (OTA) procurements, they demand that you put solutions into your customer’s hands and iterate along with your customer to deliver the most relevant capability at speed. We’ve deployed small, empowered teams to do that upfront with customers. We’re using this approach to break into some entirely new business areas.

Our customers are developing a Joint All-Domain Command and Control (JADC2) structure to avoid stove-piped capabilities that cannot communicate. So instead of picking up the phone to call in strikes, the sensors, commanders and shooters can automatically network across the services and the Intelligence Community.

They’re working feverishly in the DOD for a true statement of JADC2 requirements that we can all work off and align to, but we’re trying to build in some pieces of that in each of the services and starting to look at how those are well aligned together to shorten that kill chain.

General Dynamics Mission Systems is essentially focused in a manner that allows small teams to be responsive to individual program managers and customers in all of those domains. It isn’t a matter of us as a central leadership team directing every one of our several thousand contracts and mission systems.

Those mission systems contracts are executed by capable teams that are empowered to work directly with their customers to develop the requirements and capabilities and execute on them.”

ExecutiveBiz: After receiving a number of Navy contracts, including the Knifefish program and Littoral Combat Ships Navy contracts, how is GDMS working to enhance the capabilities for the service branch which includes intelligence, mining and UUV systems?

“We have the privilege of serving the Navy in a variety of undersea, surface and space programs, such as the Mobile User Objective System (MUOS) for servicing warfighters around the world via satellite.

These systems are largely independent of each other; thus, they require top-down command and control. Our focus going forward is how to connect all of these dots, how do we make sure all of those things work seamlessly together and again connect those shooters to the sensors so that you don’t have a hierarchical command and control structure that can be very slow in future warfighting scenarios.

The Navy has a vision they described as distributed maritime operations and Operation Overmatch, such that sensors, commanders and weapons systems seamlessly and spontaneously network and interact in a manner that can quickly adapt in any warfighting scenario they may encounter.

We’ve been focused on how to not only further some of our positions in all three of those domains with the Navy, but also how do we make them work together in a more common and standard way and have them interact in a way that shortens that kill chain again. We’re doing the same to extend that vision to all of our customers in a JADC2 environment.”

Visit ExecutiveBiz.com’s Executive Spotlight Page to learn more about the most significant leaders of consequence to the government contracting (GovCon) and federal sectors and their experiences driving growth, new business and capabilities in the fiercely competitive federal landscape.

ExecutiveBiz: With digital innovation and IT modernizations dramatically influencing the federal sector more by the day, what are some of the unique changes that you’ve seen on the business side of innovation?

“First of all, I think that we’re all enamored with the myth of a startup company becoming a unicorn and so forth, but the fact is in a company with a large portfolio, you have to pick your next bets pretty carefully, and if they are particularly cutting edge, you have to recognize that some of them will fail. You’ve got to learn to invest well to get some minimal capability and test those against the real needs of the customer.

Oftentimes, you have to put some things in the customers’ hands and see if that’s on the right track, and if it isn’t, you have to have the courage to kill it early before you spend too many resources. The trick, I think, is to learn how to say no quickly if you’re on the wrong track, so you really can double down on those things that have promise.

It’s always very exciting to have that first capability and put a prototype out there to do a great demo. But once everyone gets over the high of seeing a cool capability, you have to step back and say, how are we going to support this? What about obsolescence? How do you train the warfighters to use this thing? How do you even transport it and ship it? Is the supply chain going to be in place to produce this in large-scale quantities? There’s so much more work to do beyond the initial prototype.”

ExecutiveBiz: What are some of the most significant ways that drone technology will influence the defense and government sectors in the near future? How do you address the challenges of intelligence, data and other areas to protect our national security from potential drone threats?

“First, I’ll talk about our offensive capabilities for a moment. I think that we’re probably at the point where we’re seeing the last major manned aircraft developments during this decade or so and after that I think we’re going to primarily see sustainment on those and a lot of new development of drones.

Certainly, on the offensive side, we focused on mission command aspects of those working with our government prime contractors to design software and then enabling hardware for the compute and security capabilities for those.

We’ve partnered with Dedrone and made some investments in them as well to provide a capability that we’ve sold to certain DOD and State Department customers that provides an affordable and scalable drone defense.

There’s a lot of high-end drone defense capabilities out there that employ advanced radars and are very expensive, very large capabilities that are great for defending large deployed forces.

But we all recognize that every government building (and there are thousands and thousands of them that support the DOD and IC), and every building in the commercial world and every airport, shipyard, etc., is vulnerable to drone incursion.

As drones become more sophisticated and more readily available, the defense required for our critical infrastructure is going to require something that is much more affordable and scalable than what is currently used out in theater for defending against airborne threats.

That’s why we like working with Dedrone and bringing their capabilities to some of our markets, because there you have a cloud-based capability that is very easy and has a low cost of entry.

On a subscription basis, you can increase the capabilities you have from just detecting radio signals and disabling those drones based on that, up to deploying cameras and radars to identify the drone, and not only the drone, but who’s flying the drone.

There are many different signatures of drones. One of the beauties of the way Dedrone approached it is that every time they see some new threat show up at any of their deployed systems, they can go into a record mode and pull down the signatures of that drone. If it’s something they haven’t seen before, they can quickly generate the ability to detect it in all of their deployed systems and download that back out to all of their customers.” 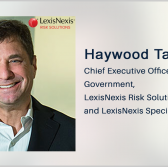 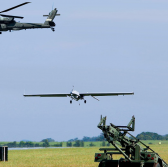