Kratos Defense and Security Solutions has delivered the first set of OpenSpace technologies to Northrop Grumman in support of its development of the Tactical Intelligence Targeting Access Node space-ground prototype for the U.S. Army.

OpenSpace quantum and SpectralNet products will be used to virtualize TITAN’s processing of data coming from various commercial satellite systems to provide Army commanders on the ground with near real-time targeting information, Kratos said Monday.

The quantum offering is designed to replace modems and other hardware prototypes with software that scales better and adapts to changing missions and conditions faster, while SpectralNet is meant to digitize the radio frequency satellite signals headed to the prototype. Combined, the two technologies are intended to meet the space-to-ground systems’ space, weight and power requirements.

“OpenSpace technology is leading efforts across the satellite industry, both among commercial and government operators, to capitalize on the ability of virtualization and modern networking techniques to realize digital transformation goals,” said Frank Backes, senior vice president of federal space solutions at Kratos.

Aside from providing OpenSpace products, Kratos is also responsible for manufacturing modified tactical shelter and other related subsystem hardware to protect mission-critical system components on TITAN. 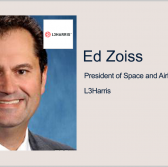