A Raytheon Technologies business unit completed the initial flight test of an air-launched effects drone that it designed to meet the size, weight and power requirements of the Future Vertical Lift program of the U.S. Army.

The defense contractor was selected by the Army in August 2020 as one of the three awardees of Other Transaction Authority contracts for the development of ALE air vehicle designs.

The recent effort is the first in a series of flight tests intended to modernize the drone’s design, payload integration and expand the drone’s maturity and performance. 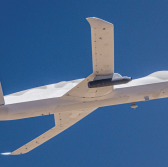