Barlow will serve as director of recruiting and oversee a team that would work to grow Black Cape’s workforce in support of the company’s national security missions, the company said in a Jan. 24 news release.

Gilbert, who spent more than two decades in the U.S. Air Force, has been named director of human resources. She became affiliated with Black Cape through the Department of Defense’s Skill Bridge transition program.

Greenslit and Parrish will serve as directors of software engineering and continue to lead the company’s software teams to support government and commercial customers. 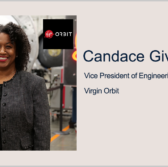