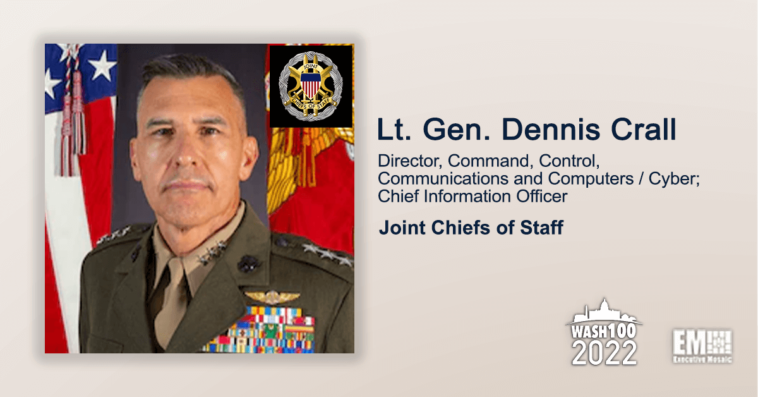 Executive Mosaic is pleased to announce Lt. Gen. Dennis Crall, chief information officer and director of command, control, communications and computers/cyber at the Joint Chiefs of Staff, as a 2022 Wash100 Award inductee for continuing development and implementation of the Joint All Domain Command and Control strategy.

This marks the second consecutive Wash100 recognition for Crall. His first inclusion in the group of officials and executives of consequence in the government contracting sector highlighted his efforts to establish the JADC2 roadmap and push for technology innovation.

Visit Wash100.com to vote for Lt. Gen. Dennis Crall as one of the most significant leaders who will influence the GovCon industry in the coming year. Cast your 10 votes to advocate for your favorite individuals in the public and private sectors.

Speaking at a C4ISRNET event in April, Crall expressed the need for the Department of Defense to have an enterprise cloud that could help ensure data accessibility and its delivery to the tactical edge. “Just because you’ve established the environment doesn’t mean you have the sharing agreements and doesn’t necessarily mean you have the security apparatus in place to ensure the data is safe,” he said.

In the following month, Crall confirmed that Lloyd Austin, secretary of defense and a fellow 2022 Wash100 Award winner, approved the strategy document for the JADC2 concept, which highlights the use of artificial intelligence, 5G and other emerging technologies to establish a warfighting communications network for facilitating military services’ data sharing efforts.

“So in the simplest terms, what the JADC2 strategy does is it does bring order to our efforts in the command and control arena to sense, make sense, and act all at the speed of relevance,” explained Crall, who also talked about data-centricity; identity, credentials and access management platforms; and other key elements of JADC2.

As the DOD entered the first phase of JADC2 delivery, Crall said in August that the minimal viable product for the concept will have a variety of features, including a platform that is envisioned to enable DevSecOps and offer source code repositories.

Other critical features are identity credential access management and zero trust approach to cybersecurity. “We really have to make sure we get that right, or the follow-on pieces of artificial intelligence can’t be realized,” said Crall about identity credential access management. He also expects to have the JADC2 MVP capability in place in fiscal year 2022.

In November, a new JADC2 division was established within Crall’s J-6 office for the management of efforts to implement the network-centric framework for military operations. It will oversee the JADC2 Cross-Functional Team that has 150 individuals responsible for JADC2 implementation. The new division is one of 12 J-6 units.

Crall expects the CFT to continue to be operational for three to five years, saying that it is “the best governance for our current time.” The team is led by Brig. Gen. Robert Parker and is comprised of several working groups that work on various efforts in support of the JADC2 strategy. It is established to enable the integration of each service’s individual acquisition and development efforts.

Crall said in late December that it is time to implement the JADC2 strategy. “Planning is good. Talk is good. Now it’s delivery time, and we’ve been given a clear signal to begin pushing these outcomes to the people who need them.”

Aside from the JADC2 initiative, Crall also remarked about information warfare. He underscored the need for the U.S. to develop a better strategy and field more advanced tools for information operations amid the escalating global influence campaigns.

“The speed at which machines and AI won some of these information campaigns changes the game drastically for us. If we study, if we’re hesitant, if we don’t have good left and right lateral limits, if every operation requires a new set of permissions…We’re never going to compete,” Crall said during an NDIA conference.

The official calls for the U.S. to keep pace with the changes in digital transformation, predictive analytics, machine learning and artificial intelligence to maintain relevance in information campaigns.

Crall was appointed to the rank of lieutenant general and assigned to his current posts at Joint Staff in May 2020. His prior positions include senior military adviser for cyber to the under secretary of defense for policy; and chief of Joint Cyberspace Center at the U.S. Central Command.

Executive Mosaic congratulates Lt. Gen. Dennis Crall on his 2022 Wash100 Award. His efforts to drive continued JADC2 implementation reflected his leadership and push for modernization across the military and government that Executive Mosaic is honored to recognize. 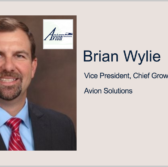