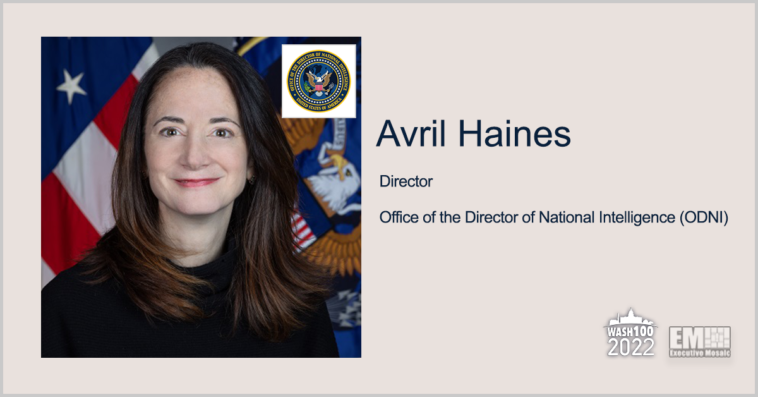 Executive Mosaic is pleased to induct Director of National Intelligence Avril Haines into the 2022 class of the Wash100 Award in recognition of her leadership in taking steps to address national security threats posed by global peers and highlighting the role of the intelligence community in mitigating the effects of climate change.

This marks the second consecutive time that Haines was presented with the most prestigious award in all of government contracting industry. Visit Wash100.com to cast a vote for her as one of your favorite executives of consequence to the GovCon sector.

Her Wash100 debut in 2021 underscored her efforts to lead IC’s new strategies and priorities aimed at supporting national defense and security and leveraging emerging capabilities.

“She leads through dedicated expertise and is expected by the Intelligence industry to be a unifying force at this critical time in our history,” said Jim Garrettson, CEO of Executive Mosaic and founder of the Wash100 Award, commenting on Haines’ first Wash100 recognition.

With Haines at the helm of the Office of the Director of National Intelligence, she sought to rebuild alliances that were hit during the previous U.S. administration. “[It is] increasingly important for us to invest in those partnerships to make sure that we’re working with our partners and allies across a range of issues,” she said at a defense-focused summit in March.

“The American people should know as much as possible about the threats facing our nation and what their intelligence agencies are doing to protect them,” said Haines. “This report provides transparency to Congress and our nation’s citizens with the aim of bolstering trust in our work and institutions.”

During her keynote address in September, the DNI listed the top five priorities for IC amid the changes in global security. Workforce, technology innovation, partnerships and industry resilience are some the community’s focus areas. The remaining priority is investment in new era expertise such as digital expertise and environmental knowledge.

On the subject of climate change, Haines remarked that climate is an urgent crisis. She said addressing climate change must be part of the U.S. foreign policy and national security efforts.

“To do so, however, it is necessary to inject climate science and analysis across our functional and regional work, deepen and strengthen our partnerships on these questions, and learn to incorporate the long-term trends,” she noted at the 2021 Leaders Summit on Climate in April.

Haines called for collaborations among departments and agencies to make climate change-focused efforts a whole-of-government initiative.

Haines assumed the DNI role in January 2021, making her the seventh Senate-confirmed director and the first woman to hold the position. Her national security experience includes time as CIA deputy director.

Executive Mosaic congratulates Avril Haines and the Office of the Director of National Intelligence for their selection to receive the 2022 Wash100 Award.

This year represents the ninth annual Wash100 award selection. The Wash100 is the premier group of private and public sector leaders selected by Executive Mosaic’s organizational and editorial leadership as the most influential leaders in the GovCon sector. 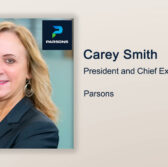 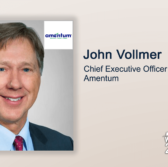