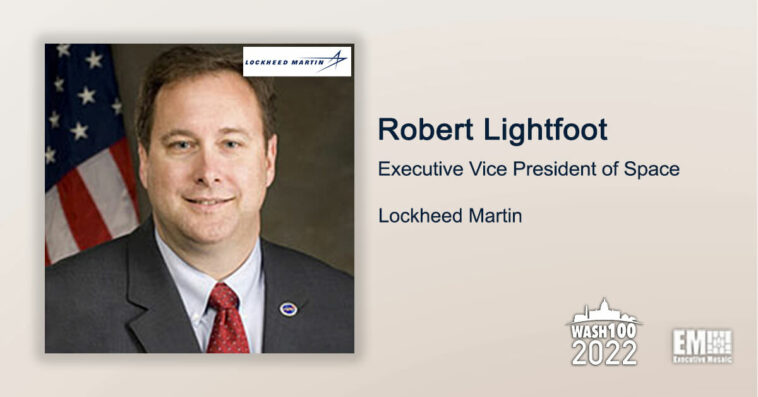 Executive Mosaic is pleased to announce Robert Lightfoot, executive vice president of Space for Lockheed Martin, as a recipient of the 2022 Wash100 Award for his leadership and drive for innovation in space technology, including the advancement of space exploration and expanding Lockheed’s footprint in the space market as well as the defense and aerospace industries.

Lightfoot has received the most prestigious award in all of government contracting (GovCon) as a two-time Wash100 winner. Lightfoot received the award initially in 2017 during his tenure as the associate administrator of NASA where he managed the daily execution of its $19.3 billion annual budget with 17,500 employees spread across five mission areas and 10 different locations.

Visit Wash100.com to cast a vote for Robert Lightfoot as one of your TEN votes to advocate for your favorite leaders in the federal and government sectors.

Following the end of his tenure with NASA in 2018, Lightfoot joined Lockheed Martin in 2019 as its vice president of Strategy and Business Development for its Space business. In Jan. 2021, he was promoted to his new role as the vice president of Operations.

He held onto that position until Jan. 2022 when he was named as the segment’s executive vice president, succeeding six-time Wash100 Award recipient Rick Ambrose in the role.

“I’m honored to lead Lockheed Martin Space and work with our customers to strengthen their missions of security, exploration and discovery through innovation and partnership,” said Lightfoot.

COO Frank St. John expressed his excitement for Lightfoot to bring his experience and people leadership skills to Lockheed Martin to drive space business, but also the broader aerospace and defense industries.

Most recently, Lockheed Martin received three contracts from NASA to oversee critical aspects of the agency’s Mars Sample Return program on Feb. 15th. For the first contract, the company will produce the cruise stage to steer the Mars-bound journey of the lander on the surface as well as its comprehensive elements, including the solar arrays, structure and thermal properties.

The second contract is for the Mars Ascent Vehicle (MAV), which is a lightweight rocket that sends sediment and atmospheric samples back to Earth. The company will  design, build, test and deliver the rocket. The MAV will be the first rocket to lift off from the surface of another planet.

The final NASA contract is designed to bring those first ever samples safely back to Earth from the Red Planet. Lockheed expressed the importance and responsibility to be entrusted and have the capabilities to advance human space exploration for the groundbreaking mission to Mars.

In addition, Lockheed Martin also received two science missions with NASA to improve our understanding of the dynamics of the Sun and its impact on the Earth. The two science missions, called the Multi-slit Solar Explorer (MUSE) and HelioSwarm, will provide new and deeper insight into the solar atmosphere and space weather.

“We like to look at things differently here at Lockheed Martin. I am so excited that our Advanced Technology Center team was selected for the Multi-slit Solar Explorer science mission,” said Lightfoot via LinkedIn.

“Using unique optical instruments and recent breakthroughs in imaging technology, the team is going to gather data to answer unresolved questions about the Sun and the constantly changing space environment,” he added.

In addition, Lightfoot also served as the director of the Marshall Space Flight Center between 2009 and 2012. He’s also received numerous accolades in his career, including the Presidential Rank Award for Meritorious Executives in 2006 and a NASA Outstanding Leadership Medal in 2007 for “outstanding and exemplary leadership.”

Executive Mosaic is proud to recognize Lockheed Martin and Robert Lightfoot for being named a 2022 Wash100 Award recipient. Lightfoot has demonstrated a level of success and recognition that can only be recognized by the Wash100 Award and the GovCon community.

Visit Wash100.com to vote for Robert Lightfoot and who you believe deserves the recognition as the most significant leader to the GovCon community and federal landscape. 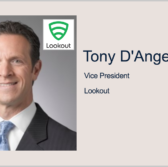 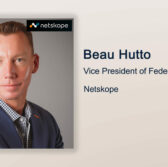