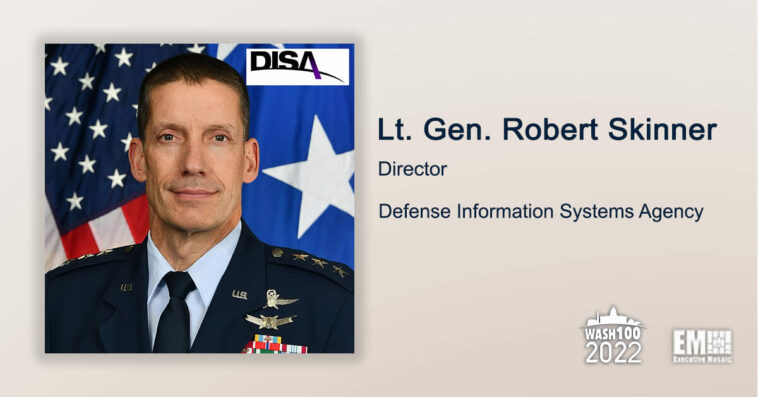 Lt. Gen. Robert Skinner, director of the Defense Information Systems Agency (DISA), has been named a 2022 Wash100 Award recipient for his visionary leadership and drive for innovation for DISA as the agency works to implement the most significant strategic growth changes to focus on cybersecurity and cloud computing capabilities as well as command and control for warfighters readiness.

Executive Mosaic is pleased to recognize Skinner as a first-time Wash100 winner, the most prestigious award in all of government contracting (GovCon).

Visit Wash100.com to cast a vote for Robert Skinner as one of your TEN votes to advocate for your favorite leaders in the federal and government sectors.

Lt. Gen.Robert Skinner was nominated to succeed Vice Adm. Nancy Norton, fellow two-time Wash100 Award winner, as the director of DISA back in Sept. 2020. He was also appointed the Joint Forces Headquarters-Department of Defense Information Network commander as well.

Lt. Gen. Skinner received the Senate’s confirmation for the role in Nov. 2020 and has since served as the DISA director to manage a global network and lead nearly 19,000 service members, civilians and contractors who plan, develop, deliver and operate joint, interoperable command and control capabilities and defend an enterprise infrastructure in over 42 countries.

As Commander of Joint Force Headquarters-Department of Defense Information Network (JFHQ-DoDIN), he is charged with leading unified action across DoD to secure, operate and defend the DoDIN. He leads the establishment of DoDIN priorities and directs threat-informed actions through formal planning and future operational initiatives

Since assuming the role as DISA director, Skinner recently made a statement following the big announcement that the agency, and fellow 2022 Wash100 Award winner Kathleen Hicks, have approved a new DISA charter that incorporates changes to its mission, organization, roles and responsibilities.

“Our strategic plan and resources are aligned to the charter,” said Lt. Gen. Robert Skinner, DISA director and JFHQ-DODIN commander. “We will continue to ensure that our work traces directly to our mission that is identified in this foundational document.”

DISA’s charter now reflects changes in information technology and information systems capabilities made during the last 16 years. The update also includes heavy focus on strengthening the agency’s authority as well as significant efforts to reform critical initiatives such as cybersecurity and cloud computing.

“The charter validates our ongoing and future missions,” Lt. Gen. Skinner added. “Designated as a Combat Support Agency, DISA continues to play a crucial role in the cybersecurity and defense of DOD networks and information systems in support of the warfighter.”

In addition, Skinner has advocated that command and control is the top priority for him and DISA heading into 2022 and beyond. As a part of DISA’s new strategic plan and multiple lines of effort to adapt, Skinner is prioritizing C2 capabilities and systems to secure a “high ground” advantage for the agency over external threats and near-peer competitors.

He also emphasized that part of DISA’s strategic plan through 2024 is also focused on driving force readiness and innovation as well as harmonizing cybersecurity and user experience, empowering the workforce and leveraging data to be the center of gravity for the agency.

Skinner noted that DISA must facilitate across future battlefields the distribution of via Joint All-Domain Command and Control (JADC2), which will help streamline C2 initiatives by linking sensors from various service branches into a single network.

“DISA is at the heart of C2 and the heart of JADC2,” Skinner explained. “That is why we are prioritizing command and control,” he said. “We have to organize the battlespace to ensure 100% is secured.”

Visit Wash100.com to vote for Robert Skinner and who you believe deserves the recognition as the most significant leader to the GovCon community and federal landscape.

Executive Mosaic is proud to recognize Lt. Gen. Robert Skinner as a 2022 Wash100 Award recipient. As a first time winner of the most coveted award in GovCon, Skinner has demonstrated a level of success and recognition that can only be recognized by the Wash100 Award and the GovCon community. 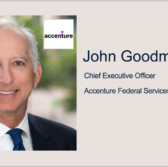 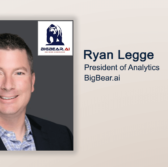