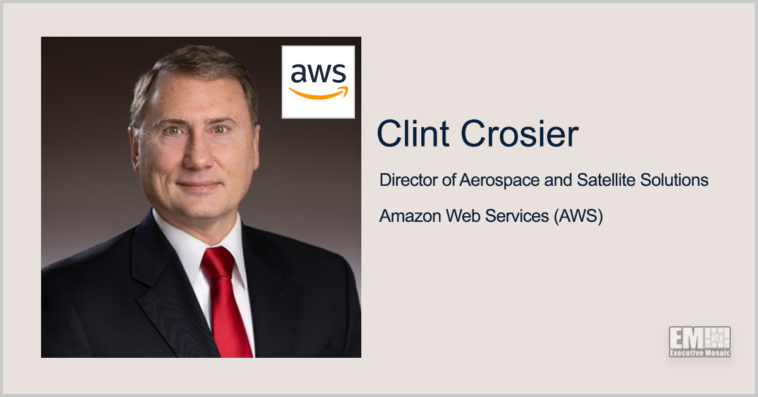 In addition, Crosier also discussed the advancement of global communications and cloud capabilities as well as how AWS Cloud is modernizing network and platform capabilities. He also touched on the impact of high-performance computing, digital engineering and other aspects for space exploration as well as the development of the future of warfare.

“Game changer is an overused term these days. I’d just like to make it clear that we’re not talking about an evolution in technology, we’re talking about a revolution that’s more than game changing because it changes the entire environment. High performance computing, digital engineering and digital simulation is the way of the future.”

You can read the full Executive Spotlight interview with Clint Crosier below:

ExecutiveBiz: What can you tell us about the challenges and opportunities to establish the U.S. Space Force as the lead architect, the first military service in 72 years? How did your career and understanding of the future of space help your outlook on designing the branch?

“We have services that are organized to protect and defend the air domain, our land, the U.S. Army, the maritime domain, etc. But, we didn’t have a service focused on protecting and defending the space domain and we needed to put something in place.

In the very early days when Gen. Raymond and I would sit down and start building a Space Force, we determined it would need to be leaner and smaller to ensure it was more agile and focused on mission execution.

We wanted to establish the first truly digital service branch that was powerful. The opportunity was to create a service that operated differently for the 21st century.

I have a plaque from Gen. Raymond with a handwritten note saying, ‘Clint, what a way to close out your career after 33 years! Thank you.’ I can’t think of a better way to end my service to our nation. On that note, it’s a perfect segue into Amazon Web Services.

AWS has been watching the space domain grow very rapidly and recognized how valuable the cloud could be to the space enterprise. It was a perfect alignment as we were determined to set up an organization that was focused specifically on the space domain.

That was the team that I have the honor of leading because we recognize the security, cost improvement and the agility aspect as well as the speed, global positioning and data flexibility. All of this together is a powerful combination.

One of the things I love about our abilities here at AWS is to bring much improved solutions to the federal government. It might be in national security or the DoD and the intelligence community, but we are constantly helping to innovate their capabilities.

AWS puts out upgrades and enhancements to our technology each year to ensure faster, cheaper and more effective processes and tools for the government to leverage immediately to develop their solutions.

That’s just a really powerful combination and one that I didn’t appreciate enough during my time in government. As the US government continues to modernize the way it conducts business and serves the warfighter, AWS is committed to be a part of that mission.

I look at the ability for the government to move much faster and efficiently. It’s all really exciting to watch and be a part of moving forward.”

ExecutiveBiz: Congrats on the recent event with the Pacific Telecommunications Council (PTC) talking about global communications and cloud capabilities! How is AWS Cloud making an impact across the federal sector and how is AWS modernizing network and platform capabilities?

“I’m really excited and quite proud of the work that AWS is doing to support the federal government. AWS has a global footprint and we are the largest cloud provider with the largest, broadest and deepest infrastructure around the world, which gives us an opportunity to support governments around the globe.

We’re very pleased about that, but one of the things that is so exciting was that AWS stood up the public sector aspect of our business about a decade ago. It was set up specifically to demonstrate our unwavering commitment to our public sector customers in the defense and intelligence sectors.

AWS believes governments and the citizens they serve should have access to the same innovation as the private sector.  We’re happy to be able to bring that value of cost savings and agility as well as improved elasticity to our customers.

As we think about a warfighting environment and the DoD on the military side of things, one of the most important ways that we can help the government is to help them achieve a strategic advantage that comes from gathering and analyzing data faster and where it’s needed most.

The advantage goes to whoever can execute their loop faster, make sense of what’s happening, determine what to do and push data, information and the decisions back out to the field. That’s the organization or military branch that will have established a strategic advantage, which is where cloud capabilities are extremely helpful.

AWS has the largest global infrastructure footprint of any cloud provider. As a result, we have the ability to posture data and ingest data from all over the world. As we bring it together, we can run tools like artificial intelligence, machine learning and advanced analytics at scale.

AWS was the first cloud operator to develop a government cloud or environment on our platform that allowed sensitive government work to take place. Now, AWS is able to support government work from unclassified all the way to top secret. That’s powerful as we talk about national security.

These are the things that have really made a difference such as network improvement and network enhancement. There are some really interesting things that we have in development. As is often the case, you can see interesting work come out of the commercial sector that can be moved or applied to the federal sector. We’re doing that quickly with our customers.”

ExecutiveBiz: As the space landscape continues to shift and innovate at a rapid pace, what role will high-performance computing, cloud computing, digital engineering and other aspects work to address a “barrier of entry” for other organizations to expand into space.

“Game changer is an overused term these days. I’d just like to make it clear that we’re not talking about an evolution in technology, we’re talking about a revolution that’s more than game changing because it changes the entire environment. High performance computing, digital engineering and digital simulation is the way of the future.

For example, Digital Earth Africa is a company that does Earth observation imaging. They take satellite data to look at the continent of Africa and identify interesting things that are happening related to food, security, water supply, roads, beach erosion, etc.

In addition, Digital Earth Africa moved their workloads to the cloud and they’re using AWS with artificial intelligence and machine learning. Through that process, they’re able to receive and utilize it for actionable insights to their users to be 800 percent faster by working with AWS cloud.

LEOLabs is another space company, working on a collision avoidance space traffic management system for low Earth orbit satellites. They were operating their own system. They’d run the global catalog of satellites, which is the thousands and thousands of satellites and debris objects that are currently in orbit.

With that information, the company produces predictions and potential collision avoidance problems and they tell us they were running 24 hours of analysis in about eight hours. That didn’t allow a whole lot of real time activity. If you have six hours at your disposal, then eight hours isn’t going to help you.

However, they moved all of that data into AWS cloud and by combining the power of high performance computing, artificial intelligence and machine learning at speed and scale with AWS, that process went from eight hours to ten seconds.

The improvement to go from a full eight hours to just ten seconds is nothing short of a game changer. And that’s just the beginning of what we can expect in the future.”

“I spent 33 years on active duty as we launched rockets, satellites and I am now supporting the same with AWS. I have a deep love for rockets and satellites. However, it’s not rocket science and it isn’t about satellite capabilities. In the end, it’s all about data. We are moving into a time in the world where that has never been as true and will continue to be moving forward.

It’s all about moving data around in real time affordably, efficiently and as secure as possible at scale. As we look at something like JADC2, it’s about every sensor being connected and having every shooter connected with moving data around the world in real time in order to execute and complete your mission faster than the adversary can. That’s what the cloud does.

As we think about the contributions from the Air Force for JADC2, the service branch awarded an IDIQ contract two years ago for Advanced Battle Management System (ABMS). We are looking into how we use that global infrastructure to provide those capabilities to the Air Force, the Space Force and back to the DoD. That will allow us to do things that we’re just simply unable to do today.

We think and talk about how the internet of things has changed our lives. Some are calling the idea of JADC2 as the ‘internet of military things.’ It’s about connecting every shooter to every sensor and how to make the data available at any location in real time with security. That’s coming soon. It’s only a matter of time.” 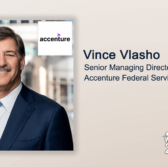