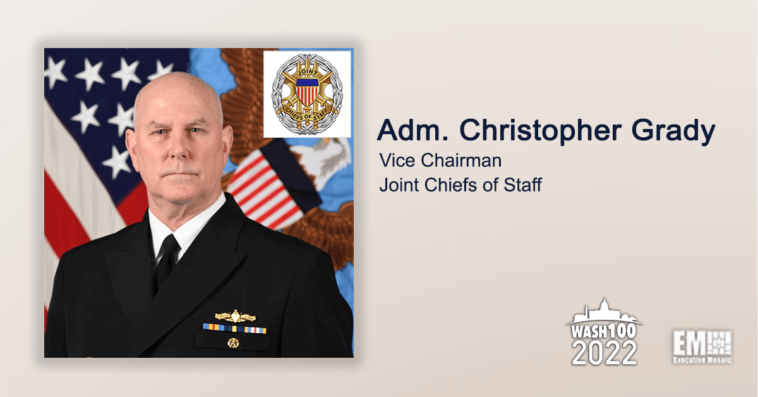 Adm. Christopher Grady, vice chairman for the Joint Chiefs of Staff, was named a 2022 Wash100 Award recipient for his leadership to reform the joint requirements process and drive innovation and modernization efforts of the nuclear triad as well as identifying the gaps in U.S. military service branch’s electronic warfare capabilities.

Executive Mosaic is honored to recognize Adm. Grady as a first-time Wash100 winner, the most prestigious award in all of government contracting (GovCon).

Visit Wash100.com to cast a vote for Christopher Grady as one of your TEN votes to advocate for your favorite leaders in the federal and government sectors.

It was announced in Nov. 2021 that President Biden nominated Adm. Christopher Grady to serve as the vice chairman for the Joint Chiefs of Staff. Grady succeeded Air Force Gen. John Hyten, a two-time Wash100 Award winner who announced his retirement at the end of Nov.

On Dec. 20th, Adm. Grady was confirmed on Dec. 16th for the role and was sworn in as the 12th vice chairman of the Joint Chiefs of Staff on Dec. 20th. His duties will include leading Grady’s duties will be leading the Joint Requirements Oversight Council (JROC) and serving as a senior member of the Nuclear Weapons Council.

“Modernization of the nuclear triad will be the underpinning of that deterrence effort against two nuclear competitors,” said Adm. Grady during his confirmation hearing, which also saw Defense Secretary Gen. Lloyd Austin, a fellow 2022 Wash100 Award winner, in attendance.

“Strong leadership in the [Joint Requirements Oversight Council] and consultation with my colleagues on the panel has to ensure a very disciplined approach to that, so we don’t get that mission creep, which can be very parochial at times,” Grady explained.

Previously, Adm. Christopher Grady held the position of commander of U.S. Fleet Forces Command/U.S. Naval Forces Northern Command since 2018. In the role, he oversaw the naval leg of the nuclear triad and championed the development and institutionalization of “Ready Relevant Learning,” aspect of the U.S. Navy’s modernization doctrine.

In addition, Adm. Grady discussed his intentions to use threat-based analyses and data to help reform the joint requirements process. He also emphasized that weapons systems should leverage advances in artificial intelligence, software development and quantum computing as well.

“A very important element of any new system will be the ability to get past a hardware-oriented weapons system development to one that is software oriented, such that you can spin in new technologies in an app-based approach,” Adm. Grady explained.

Adm. Christopher Grady is a career surface warfare officer with more than 37 years of service over the course of his career. Grady brings first-hand, day-to-day working experience to provide a broad perspective of potential capability gaps that exist within the services’ operational forces.

As Vice Chairman for the Joint Chiefs of Staff, Adm. Grady has stated a number of his priorities in the role, including the continued backing of U.S. Naval forces, identifying the gaps between long-term acquisitions and near-term capabilities.

In addition, Grady also mentioned his intentions to move away from traditional, risk-aversion policies toward a quicker-response, threat-based paradigm as well as keep pace in the current digital era that includes a growing spectrum of electronic operations and warfare.

He wants to bring commercial-military innovation and collaboration to the JROC and continue the reforms of the Joint All Domain Command and Control (JADC2). Grady also recognized the importance of contested logistics as one of the four pillars of the new joint warfighting construct.

Visit Wash100.com to vote for Adm. Christopher Grady and who you believe deserves the recognition as the most significant leader to the GovCon community and federal landscape.

Executive Mosaic is proud to recognize Christopher Grady for being named a 2022 Wash100 Award winner. As a first time winner of the most coveted award in GovCon, Adm. Grady has demonstrated a level of success and recognition that can only be recognized by the Wash100 Award and the GovCon community. 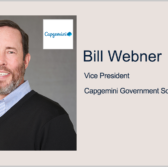