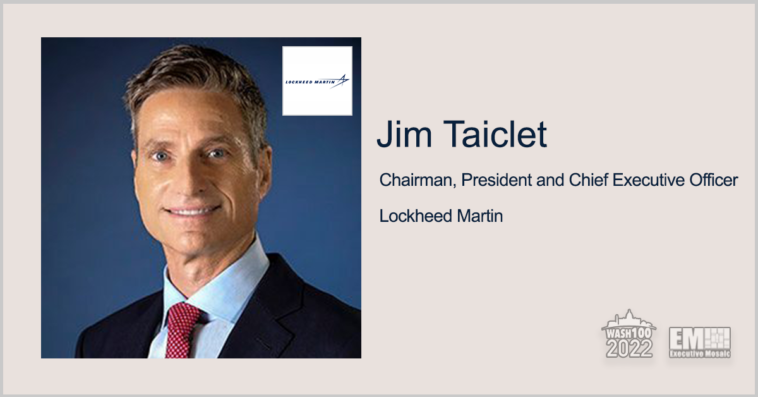 Executive Mosaic is honored to announce that Jim Taiclet, chairman, president and CEO of Lockheed Martin, has been named a 2022 Wash100 Award recipient for his leadership to drive company growth through significant contract awards and acquisitions as well as advancing IT modernization efforts, including 5G capabilities and other areas of commercial technology.

This marks Taiclet’s second consecutive Wash100 Award. Visit Wash100.com to cast a vote for Jim Taiclet as one of your TEN votes to advocate for your favorite leaders in the federal and government sectors.

Taiclet, who has been serving on Lockheed’s board since 2018, succeeded Marillyn Hewson, as president and CEO of the Bethesda, Maryland-based aerospace and defense contractor in June 2020 and assumed the additional role of chairman in March 2021.

Since taking the helm, Taiclet has made 5G technology as one of his top priorities and entered into partnerships with commercial companies as Lockheed works to help the U.S. military and its allies transition to 5G networking to provide them an edge over adversaries. He said he wants weapons systems to be digitally connected through 5G.

“I really want to drive our 5G.mil architecture,” Taiclet said in an interview published in July. “That architecture is going to be open [so] others can tie on to it, but I think since we have really strong platform positions with all the services and all the domains, Lockheed Martin can be a real pathfinder for the industry here.”

He said he believes companies should help create the technical standards to help the Department of Defense advance the Joint All Domain Command and Control strategy.

“There’s a lot of ways to get there, but I think the only feasible way is to literally start connecting individual platforms together within a technology roadmap, that plans for…the best combinations of existing and new platforms to create a network effect and thereby, greater returns, capability, and also greater effectiveness, if deterrence is not successful,” he noted.

Taiclet said Lockheed plans to work with commercial technology and telecommunications sectors to improve the ability of legacy platforms, like the F-35 fighter jet, to process data and integrate new capabilities through open architecture, a move which he said will result in a network effect that will enable platforms to share data.

“The F-35 is a much more valuable platform when you take advantage of the network effect that it can deliver by connecting sensors across domains, adding 5G.mil capability to our comms systems so that we can communicate with satellites directly,” he said.

“You end up getting a whole network effect with a value to the defense enterprise and the deterrent value is going to go up by implementing this across our technology roadmap over the next couple of years.”

He noted that the company’s move toward the network effect is underway and is aligned with its open architecture approach.

During the third quarter of 2021, Taiclet said Lockheed employees continued to provide capabilities in support of U.S. and allied defense and civil space programs.

“At the same time, we continued to advance the state of the art and innovation across key technologies, including Future Vertical Lift, Integrated Air and Missile Defense, hypersonic weapon systems, next generation satellites, and many others,” he noted at the time when Lockheed reported $16 billion in Q3 net sales.

Taiclet is a retired U.S. Air Force officer and pilot who joined Lockheed from American Tower, where he served as chairman, president and CEO. He held senior leadership roles at Honeywell’s aerospace services unit and Pratt & Whitney.

Visit Wash100.com to vote for Jim Taiclet and who you believe deserves the recognition as the most significant leader to the GovCon community and federal landscape.

Executive Mosaic is proud to recognize Lockheed Martin and Jim Taiclet for being named a 2022 Wash100 Award recipient. As a repeat winner of the most prestigious award in all of government contracting (GovCon), Taiclet has demonstrated a level of success and recognition that can only be recognized by the Wash100 Award and the GovCon community. 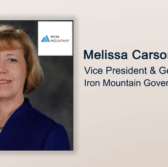