A SpaceX Crew Dragon capsule is set to transport four astronauts to the International Space Station on April 19 as part of NASA’s series of commercial crew rotation flights.

The Crew-4 mission will lift off onboard SpaceX’s Falcon 9 rocket from Launch Complex 39A at Kennedy Space Center in Florida, the space agency said Saturday.

The trip will be led by NASA astronaut Kjell Lindgren and will include fellow NASA crew members Bob Hines and Jessica Watkins as well as the European Space Agency’s Samantha Cristoforetti.

The crew and officials from SpaceX, NASA and ESA will hold a briefing on Thursday at Johnson Space Center in Texas to discuss the mission.

SpaceX is currently under a $900 million contract with NASA to conduct three more trips to the ISS with Crew Dragon while Boeing addresses issues on its manned spacecraft. 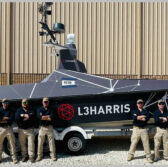