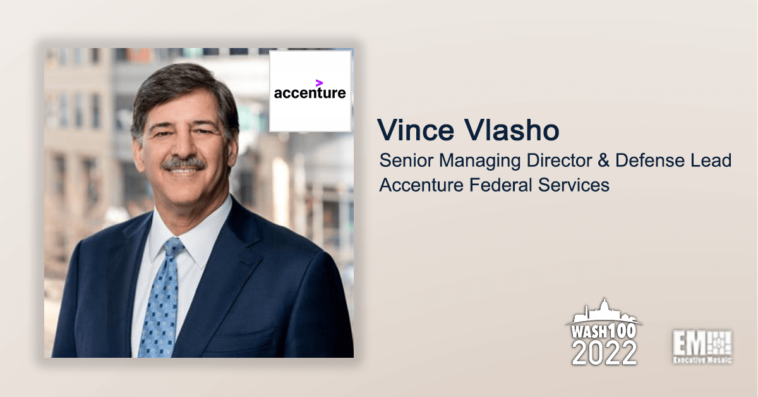 Vince Vlasho, senior managing director and defense lead for Accenture Federal Services (AFS), has been named a 2022 Wash100 Award winner, marking the first time in his illustrious federal career that he’s won the most acclaimed award in all of government contracting (GovCon) for his leadership to drive the latest IT modernization efforts for U.S. military branches and the federal landscape.

Visit Wash100.com to cast a vote for Vince Vlasho as one of your TEN votes to advocate for your favorite leaders in the federal and government sectors.

“We look forward to helping the Army move toward a unified ERP supported by innovative approaches and industry best practices,” Vlasho explained. “This is an important opportunity to help the Army sustain its legacy systems yet enhance modernization through advanced technologies, such as automated enterprise services.”

The major contract win for AFS continues the company’s work from Oct. 2020 when Vlasho explained that AFS will apply its commercial technology platforms to the branch’s cloud migration project.

Its work with the Air Force on the Defense Enterprise Accounting and Management System helped AFS to build a cloud-based common enterprise resource planning system for the service branch.

Vlasho also cited artificial intelligence and robotic process automation as among the emerging areas in the government market where he is seeing a demand for and observed defense agencies looking to commercial products to accelerate information technology modernization efforts.

During his recent Executive Spotlight interview with ExecutiveBiz, Vince Vlasho discussed how emerging technologies can advance security and mitigate risk as well as how AFS remains competitive in an ever evolving market.

“Innovation at speed is the new battleground. DoD services and agencies are increasingly adopting emerging and disruptive commercial technologies to advance their IT modernization programs. The modernization isn’t new per se, but the acceleration most certainly is,” Vlasho explained to ExecutiveBiz.

This ultimately will increase their agility and responsiveness and keep them as the global leaders in performing their critical missions in support of our great nation. Innovation is constantly evolving. So must the military’s ability to adapt and keep pace,” he added.

In addition, Vlasho also discussed eight principles in March 2021 that he recognizes as the core areas that the U.S. military should consider in managing technology convergence and maintaining a significant advantage in a multidomain battlefield as well as the advancement of the “future of warfare.”

Vlasho mentioned that people are the most significant element to keep the technological edge for the U.S. against our adversaries. The U.S. military should “invest in training and development of a digital-minded workforce that can engage with transformative technologies.”

He also explained the importance of the Armed Forces learning how to facilitate sharing of data in a secure manner. “A data governance strategy is needed that aligns rules across DOD organizations and with allies,“ Vlasho added.

Executive Mosaic is proud to recognize Accenture Federal Services and Vince Vlasho for being named a 2022 Wash100 Award recipient. As a first time winner of the most coveted award in GovCon, Vlasho has demonstrated a level of success and recognition that can only be recognized by the Wash100 Award and the GovCon community.

Visit Wash100.com to vote for Vince Vlasho and who you believe deserves the recognition as the most significant leader to the GovCon community and federal landscape. 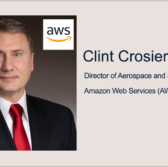