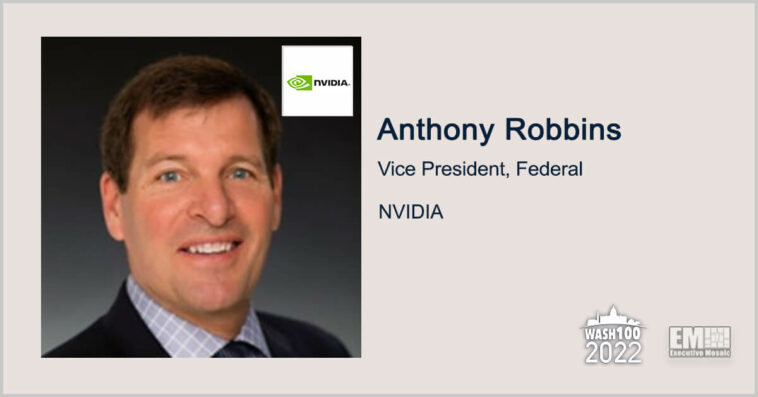 Executive Mosaic is pleased to select Anthony Robbins, vice president of NVIDIA’s federal arm, as a recipient of the 2022 Wash100 Award, which annually recognizes the top figures in the government contracting community for their impacts across the federal landscape.

This marks Robbins’ fifth Wash100 selection and represents his commitment to ushering in an era of artificial intelligence-powered transformation within the federal government.

Visit Wash100.com to cast your vote for NVIDIA’s Anthony Robbins as your favorite GovCon leader and to learn more about the award’s nine-year history.

“Growth in the artificial intelligence space continues to accelerate unabated, along with the rapidly tightening fabric of relationships that Anthony Robbins of NVIDIA has been weaving throughout the federal sector and government contracting,” commented Jim Garrettson, CEO of Executive Mosaic and founder of the Wash100 Award. “Anthony’s prolific social networking efforts and educational thrust toward the marketplace have helped to position NVIDIA as a true pioneer of edge processing, artificial intelligence, cloud enablement and algorithm development. He has played a key role in elevating our national security at the agency and legislative levels.”

Garrettson continued, “In addition to national defense, homeland security and intelligence, Anthony has helped leverage the colossal strength of NVIDIA’s algorithmic solutions to support forest fire mitigation, digital twin modeling in the Omniverse and health care, to name only a few.”

Anthony Robbins has long been an advocate for the use of AI in critical government infrastructure and processes. Robbins said the Department of Defense’s Joint Artificial Intelligence Center, known as JAIC, aims to tie together disparate AI-related efforts across the public sector to allow for better collaboration and quicker problem-solving capabilities.

He told Federal News Network in February 2021 that JAIC is offering predictive maintenance, consultancy services, and other testing and evaluation services to help the Pentagon scale its AI adoption.

The U.S. Postal service implemented a distributed edge AI system on NVIDIA’s EGX platform to help optimize the process of identifying and tracking packages. The platform, known as the Edge Computing Infrastructure Program, was born out of a collaboration between USPS data scientists and NVIDIA architects who teamed up to design deep learning models that could analyze a massive amount of images and packages more efficiently.

“The federal government has been for the last several years talking about the importance of artificial intelligence as a strategic imperative to our nation, and as an important funding priority,” Robbins said. “And this is one of the few enterprise-wide examples of an artificial intelligence deployment that I think can serve to inspire the whole of the federal government.”

NVIDIA is also helping the federal government to better predict, mitigate and address wildfires using AI and digital twin modeling technology. NVIDIA is working collaboratively with Lockheed Martin to help the Department of Agriculture’s Forest Service and the Colorado Division of Fire Prevention and Control manage wildfires that pose increasingly frequent and severe threats across the U.S.

“Lockheed Martin and NVIDIA will continue to collaborate, both physically and within the digital twin environment, to develop and mature CMM [Cognitive Mission Manager],” Robbins said. “One day, uncrewed aerial vehicles will rapidly respond to and suppress emerging wildfires.”

The NVIDIA-Lockheed partnership also has plans to establish a Silicon Valley-based AI development laboratory to accelerate this effort.

NVIDIA continued its commitment to sustainability and environmental issues through the launch of its platform for scientific digital twins in March 2022. The platform, consisting of NVIDIA’s Omniverse and Modulus AI framework, accelerates physics machine learning models in scientific computing and engineering use cases.

Robbins is also an active participant in multiple philanthropic efforts, including the U.S. Marine Corps’ Toys for Tots program, which collects and distributes Christmas gifts to underprivileged children. He told GovCon Wire in a GovCon Executives Who Care spotlight that the challenges his mother had to overcome in the workforce inspired him to get involved in the program.

“I have found that contributing to the program allows me to give back to our community, and perhaps put smiles on the faces and in the hearts of so many wonderful children,” Robbins added.

Executive Mosaic congratulates Anthony Robbins and the NVIDIA team on their selection to receive the 2022 Wash100 Award, and we look forward to their continued progress in the federal government’s AI-fueled transformation. 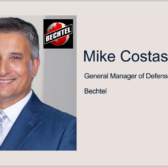