Six research and development projects will receive $24.9 million in combined funding from the Department of Energy to support U.S. clean energy goals through technology development for hydrogen production.

Two projects will be led by Raytheon Technologies’ research center while the remaining two will be conducted by 8 Rivers Capital and Gas Technology Institute. 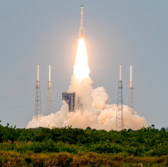