NASA has selected the U.S.-incorporated subsidiary of Telesat to demonstrate the potential of its satellite-based broadband connectivity network to provide space-to-space relay capabilities to support communications for future near-Earth missions.

Telesat Government Solutions said Tuesday it received $30.7 million in funding from the Communications Services Project to co-develop space-based radio frequency terminals that will be hosted on two Earth observation spacecraft.

The RF terminals will transmit data in Ka-band frequency to Telesat-operated satellites located at a higher altitude. 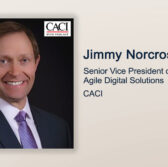