A $280 billion funding bill that seeks to strengthen the U.S. semiconductor chip manufacturing capability is now awaiting approval from the House of Representatives following the Senate’s 64-33 vote on Wednesday to pass the bipartisan legislation.

The CHIPS and Science Act of 2022 calls for over $52 billion in funding to support the domestic production of semiconductors as well as research, training and transition programs in the industry. Chip factories would also get approximately $24 billion tax credit under the legislation.

Commenting on the CHIPS Act, President Joe Biden said, “It will accelerate the manufacturing of semiconductors in America, lowering prices on everything from cars to dishwashers. It also will create jobs – good-paying jobs right here in the United States.”

“As chairman of the Senate Select Committee on Intelligence, I see examples every day of how China is doubling down on its pursuit of advanced technologies that I think will define the 21st century,” he said.

Warner noted that the U.S. has started to lag behind its competitors but added that it can still keep up given the right investments.

“This funding sends a message that the United States is putting a strong down-payment on maintaining our edge in the global technology race – and preventing global supply chains from being weaponized against the United States or for that matter, against our allies.”

Jim Garrettson, CEO of Executive Mosaic, a leading provider of an exclusive forum and cross-media platform for government contracting executives of consequence, also expressed strong support for the legislation and highlighted how it could benefit the GovCon sector.

“An exercise in pure cost management without regard to supply chain implications and sovereignty has created high-tech vulnerability and low-tech supply chain attack vectors not just in the United States but around the globe,” he said.

“The United States, in tandem with the CHIPS Act, must also subsidize research and development that the GovCon industry is presently shouldering. Breakthrough national security and defense solutions will come from a more balanced government/GovCon model of expense sharing and perhaps a more intentional disaggregation of research solutions.” 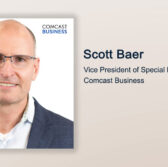