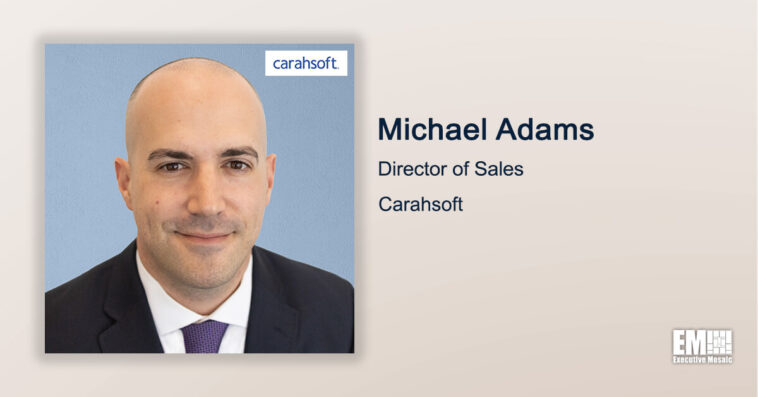 Michael Adams, director of sales at Carahsoft, recently spoke to ExecutiveBiz about the future of artificial intelligence and machine learning in the government space. Carahsoft is one of the fastest growing technology solutions providers in the nation and Adams has been with the company since 2007, shortly after its founding.

During the latest Executive Spotlight interview, Adams also discussed the evolution of AI, exciting government use cases, and Carahsoft’s role as a bridge between government requirements and best-in-breed technology.

You can read the full interview with Michael Adams below

ExecutiveBiz: You’re someone who has been in this industry for a while. From your perspective, how is the AI market in government changing?

Michael Adams: “AI in government is still evolving. Over the next few years, the developments in technology and use cases will accelerate dramatically.

If you rewind five years, people weren’t doing a lot with AI in production. They were still looking around for use cases and getting started with basic process automation, as one example. Now, we’re seeing exciting use cases, including robotic process automation, natural language processing, computer vision, and object detection.

That said, many people fear AI or robots will replace human beings in the workforce, but that is not accurate or the goal. The goal is to put humans in a position to be more efficient and have them work on tasks their unique skills are better suited for.

Over the next couple of years, the government is going to use AI to make the world safer, drive innovation in healthcare, fight fraud, and more.”

ExecutiveBiz: With more use cases, are more vendors becoming part of the AI conversation?

Michael Adams: “Yes. The number of vendors in the space has increased dramatically over the past several years. NVIDIA’s Inception program, with which Carahsoft works closely, has seen many great new companies that leverage GPUs for AI workloads in the government sector.

Also, many companies in my Carahsoft portfolio, for instance, are analytics vendors, including Tableau and Cloudera.

People think of Tableau as business intelligence: you put data into Tableau to see and understand it better. But now, AI is part of their story, too. Tableau is moving from visualization to insights: calling out anomalies and making recommendations to drive better decision-making.

Cloudera has also evolved. They used to be known for Hadoop. Now, Cloudera DataFlow is helping customers with streaming data. One of the biggest problems for customers, when they want to do an AI project, is not having enough data to train models and algorithms.

Cloudera helps companies take data from all different sources—data at the edge, data at rest—so they can actually do something with it.

In fact, just about every vendor in my portfolio has an AI story right now. They aren’t necessarily pure play AI vendors, but they have artificial intelligence and machine learning capabilities built into their products to help humans get to a better decision more quickly.”

ExecutiveBiz: AI is such a huge umbrella. When you talk to customers, where do you start?

Michael Adams: “The first step is to listen. You must understand your customer’s problems, constraints, capacity, and resources. Do they have the hardware, software, talent, and infrastructure?

What does their technology environment look like and what are their goals? It’s not about ripping and replacing their tech; it’s about complementing it and helping them leverage investments they’ve already made.”

ExecutiveBiz: Which companies operating in the AI space do you find particularly exciting?

Michael Adams: “Working with NVIDIA is always exciting. We’ve taken on some of their Inception partners and have brought software manufacturers doing everything from computer vision to cybersecurity and natural language processing into the program.

These vendors all leverage NVIDIA’s GPU to help government agencies do cutting-edge tasks. Chooch AI, for example, uses NVIDIA’S GPUs to process images and video in as little as 20 milliseconds.

I think Chooch AI is going to be big, along with H20.ai. They’re dedicated to democratizing AI, which is really exciting.”

ExecutiveBiz: To close out, tell us how your practice has grown over the years.

Michael Adams: “Carahsoft’s bookings across all business units have grown to more than $10 billion annually over the past four years. Within that, my portfolio is relatively young, but the unit will do around half a billion dollars this year.

This growth is clear evidence that government agencies are aggressively trying to implement new technology to meet mission requirements and modernize IT infrastructure.

People talk about IT modernization a lot, but what does it actually mean? It means agencies are getting their systems ready for the coming century.

Carahsoft serves as a bridge between the government’s requirements and best-in-breed technology companies, from hardware and software companies to systems integrators and small businesses.

We also have a team of dedicated professionals who are experts on the products that government agencies use. If an agency has an issue, they can talk to someone at Carahsoft. We’re smart on the technology, and we know how it’s being implemented across the government.” 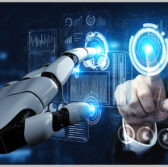 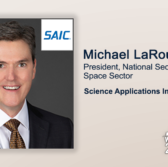