The CHIPS and Science Act has created opportunities to accelerate quantum computing technology, but more initiatives can be done to grow the industry, according to Dario Gil, senior vice president and director of research at IBM, and Bohr Quantum Technology CEO Paul Dabbar.

In a joint opinion piece published Tuesday in The Hill, Dabbar and Gil wrote that the new law authorizes the Department of Energy to invest in a large-scale nationwide quantum network infrastructure and the use of cloud-based quantum computing for scientific research.

The sector can build on these and other investments under the legislation to double down on its achievements, such as the National Quantum Initiative established in 2018, the two executives said.

They noted the NQI — which cleared $1.25 billion in federal funds for DOE, the National Science Foundation and the National Institute of Standards and Technology — is proof that quantum technology prospects can be realized faster through government-funded programs.

“Growing the quantum industry to full capacity requires continuing to increase the level of focused investment in high-impact initiatives with ambitious national goals,” they said.

Cybersecurity in quantum system development efforts will be a focal point of discussion at GovCon Wire’s “Webinar: Are Your Cybersecurity Systems Quantum-Resistant?” You have 1 DAY LEFT to register for this timely event. 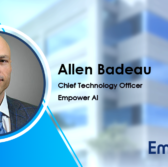