Barbara Hubbell, who has been serving as a vice president at Jacobs since June 2019, has assumed new responsibilities within the company’s newly formed divergent solutions business unit.

She now serves as VP and general manager of technology and innovative solutions, according to a LinkedIn post published Monday.

In her previous capacity, Hubbell oversaw mission analytics and convergence for Jacobs as the deputy general manager. Prior to that role, she led the company’s cyber and intelligence business unit which supported more than 150 projects across the globe.

Hubbell joined the Dallas-based technical and professional services provider after its acquisition of KeyW.

She previously worked at Sotera Defense Solutions, a national security technology contractor acquired by KeyW in 2017, and at Computer Sciences Corp. as director of finance earlier in her career.

I would be happy to discuss 4×24 with you and I did see that you posted in your ExecutiveBiz publication however, I think the post might have been a little misleading in that you said “Hubbell oversaw mission analytics and convergence for Jacobs. Prior to that role, she led the company’s cyber and intelligence business unit that supported more than 150 projects across the globe”, but in both of these roles I was the “deputy” not the VP/GM.    With that said I would be happy to take advantage of the remaining membership. 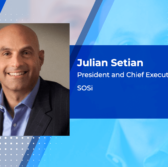