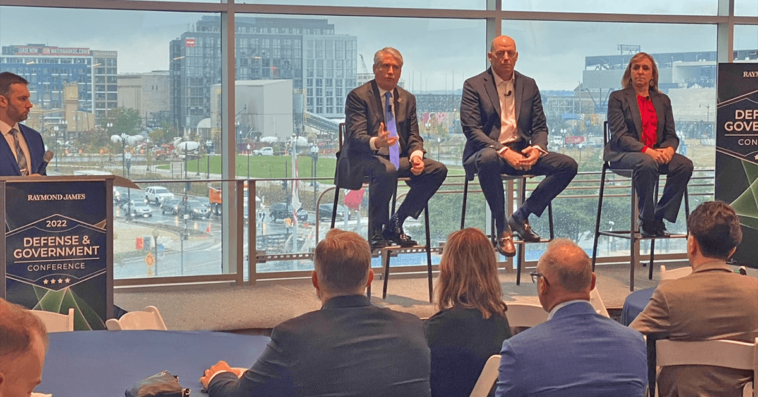 Three major GovCon sector figures and Wash100 Award winners presented to a packed conference room at Washington Nationals Park in the highlight event of the 2022 Defense and Government Conference hosted by Raymond James.

Mergers and acquisitions were a key topic during the lively discussion between John Mengucci, president and CEO of CACI, John Heller, CEO of Amentum, and Carey Smith, CEO of Parsons, as each of these three market leaders shared their insights on executing successful acquisitions.

Mengucci, Heller and Smith have each led their respective organizations in significant M&A activity over the last year. At the start of 2022, CACI purchased ID Technologies in a move that bolstered CACI’s expand its secure network modernization capabilities. Parsons acquired Xator Corporation in May, expanding the company’s offerings in special operations and the intelligence community. And earlier this year, Amentum completed its merger with PAE, and John Heller took the helm of the enterprise as a new executive leadership team was put into place.

Technology was also a cornerstone topic as each executive engaged in discussions on the intentional advancements they are currently leading within their companies.

Each speaker was asked to share their predictions for the GovCon sector in the near future as the landscape continues to change and leaders embrace the next generation of innovations.

Mengucci warned that the world is a dangerous place, and we can expect to see software play a much larger role in federal agencies as they work to protect against threats. He quipped, “Software is a superpower,” as he shared an anecdote illustrating that aircraft carriers can’t simply pull into port every time they need an upgrade, and the U.S. military will need to harness software in order to deliver capabilities at the speed of need.

Additionally, Mengucci said we can expect the government to approach government contractors with new ways to buy.

Smith shared that she foresees serious infrastructure spending and a robust defense budget. Similarly, Heller suggested that we can expect to see a significantly increased focus on money for environmental and infrastructure improvements.