Everywhere you look, microprocessor chips are used in today’s digital world. They appear in 5G networked tools, autonomous technologies, sensors and more. The U.S. government instituted the CHIPS, or Creating Helpful Incentives to Produce Semiconductors, Act this year to encourage the construction of plants to build the chips, intending to accelerate their manufacture and implementation.

Intel is the primary U.S. company creating microchips en masse, as compared to overseas competitors such as South Korea’s Samsung and Taiwan’s Semiconductor Manufacturing Company, TSMC. Intel’s federal government-aimed organization is overseen by Jim Brinker, who has been its president and general manager for nearly four years.

Brinker recently sat down with Executive Mosaic’s Summer Myatt in a video interview to help explain the impact of the CHIPS Act and outline what Intel is doing to stay agile and execute the national agenda to increase the percentage of international chip production completed in the United States. The former AT&T and Sony executive also shed light on how chips empower emerging technology areas like smart cities and edge AI.

Additionally, Brinker illustrated the differences between the government contracting landscape when he entered it versus its current status and imparted his advice to up and coming individuals trying to make headway in the industry.

Visit ExecutiveMosaic.com to view the full video interview with Intel’s Jim Brinker, and be sure to subscribe to Executive Mosaic’s YouTube channel. 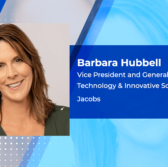