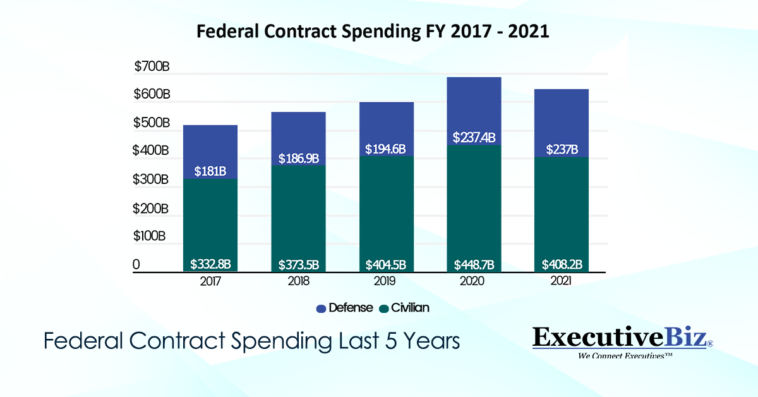 To ensure safety and improve the American people’s lives, the federal government maximizes its financial resources by working with businesses that can provide for their needs. These businesses are called government contractors.

The reason is that since the nation’s problems are continuously evolving, the government continues to increase its federal spending, making federal contracting worth a billion-dollar industry.

Enlisted below are some information about federal contract spending and how it went over the past five years.

What is it called when the federal government spends money?

The government creates an itemized plan for its annual expenditures called government spending. Federal spending is offered to large corporations and small businesses or government contractors.

However, before any business can do business with federal agencies, it must pass through a procurement acquisition process. The acquisition method provided a favorable solution for federals to identify if a business can provide their needs quickly.

Thus, before going into the industry, make sure that you equip yourself and the business with bravery and confidence to address and potentially resolve the government’s qualifications and regulations.

How much money does the federal government spend on contracts?

As mentioned above, federal contracting is a billion-dollar industry, making the federal government one of the world’s significant spenders.

In fact, during the fiscal year 2020, the federal spent about 665 billion dollars, surpassing the fiscal year 2019 with more than $70 billion. 2020 Federal spending rose by a tremendous amount due to the Covid-19 pandemic. Procurement budgets were spent on medical supplies, information technology, medical equipment, and other things related to COVID 19.

There is no specific number of how much the budget for federal contract spending could be. The federal funding may differ every fiscal year depending on the need, scenario, or even executive order.

What is an example of federal spending?

There are three categories where the federal government spent most of its federal contracting budget. They are the following:

Goods or products are the most acquired by federal agencies. Government agencies release a proposal seeking pens, papers, bolts, machinery, medical equipment, and even aircraft.

Everyone knows that the government already has thousands of employees working with them. However, little did we know that they need further help from private companies, large businesses, and small businesses.

The government works with businesses that can do transportation logistics, lab testing, consulting, and other services.

The research category on government contracts works similarly to service-based contracts. But, this type of contract spending focuses on a more specific field such as information technology, scientific research, data analytics solutions, and contract data inspections.

Any company specializing in a specific industry can significantly benefit from government contracts, especially now that information technology is rapidly developing and growing.

On the other hand, bidding for these government contracts may be challenging because many businesses might be offering the same service as yours. But, if you are willing to do so and have met all the basic requirements of government contracting, you wouldn’t mind passing through some challenges.

To give more idea about the federal contracting industry, here are their expenses from the past five years.

The United States has led the ranking for countries with the highest military spending in 2021. But according to Bloomberg, the share of the total annual procurement decreased to 27.5%, resulting in a 3.5 percent lower than its average procurement from fiscal 2017 to 2021.

In the fourth quarter of 2021 fiscal, the Defense Department budgeted 29 billion dollars less than the previous year, making a $28.4 billion net decrease throughout the entire government.

Communication is an essential key for determining how the transaction on doing business with the federal will proceed. Alongside communication is Information Technology which contributed to 2021’s remarkable spending numbers.

The government’s continued investment in IT solutions, telecommunications, cyberspace security, and cloud services impacted the overall 2021 spending data and is said to be spilled over to 2022. The IT solutions do not just work for the government alone; the federal took advantage of it to develop medical equipment quickly and improve public health systems.

Budget spending for communications and Information Technology solutions has been empowered through the bipartisan infrastructure law. So, there will be no doubt that federal contract spending will mostly come through these.

With the enormous transaction with private companies, we can say that the federal agencies rely on businesses that can provide more than they could. Obtaining products or services does not degrade the government; it makes them the best in class.

Best in class or BIC is a government-wide ranking that various government agencies can use to meet the performance criteria set by the Office of Management and Budget (OMB).

BIC offers contracts that give favorable pricing to agencies and increase the overall efficiency of the procurement process. As time goes by, the BIC market share grows from $27 billion in 2017 to a high record of $50.9 billion in 2021, resulting in an astonishing 41% growth over the five years.

Are you ready to be a government contractor?

You may read the following to guide and help you on your journey to be part of the government contracting industry. 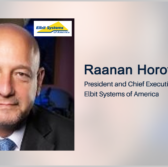