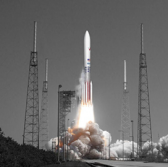 United Launch Alliance has started updating manufacturing tools and robotic assembly lines at its factory in Decatur, Ala., as it prepares to transition to Vulcan Centaur rocket production, SpaceNews reported Monday.

The Boeing–Lockheed Martin joint venture is conducting factory upgrades using funds from the Launch Service Agreement contract awarded by the U.S. Air Force in October 2018. Mark Peller, vice president of major development at ULA, said the company has begun assembly work on five major components of the rocket and expects to complete work over the next year.

“We just finished the booster structural test article, we have two Centaur upper stage test articles, plus a booster and upper stage for first flight,“ Peller said. “Early next year we“™ll start building the second article and we“™ll be transitioning the Decatur factory to recurring production of the Vulcan rocket.“

In addition to factory upgrades, ULA has signed up Astrobotic and Sierra Nevada as customers. The company“™s Vulcan rocket is set to lift off in 2021 for its inaugural mission to send an Astrobotic-built lunar lander to the moon.

The launch vehicle is also expected to take off in late 2021 to bring Sierra Nevada“™s Dream Chaser spacecraft to the International Space Station. ULA has proposed its Vulcan Centaur for the second phase of the Air Force’s Launch Service Procurement program.