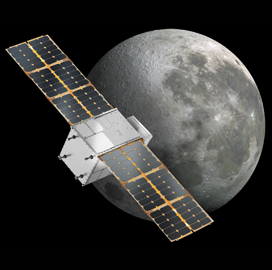 Rocket Lab has received a $9.95M contract from NASA to perform launch services for a small satellite designed to enter a cislunar orbit.

The company will field the 55-pound Cislunar Autonomous Positioning System Technology Operations and Navigation Experiment, or CAPSTONE, spacecraft aboard an Electron rocket from NASA’s Wallops Flight Facility in Virginia, the agency said Saturday.

CAPSTONE will conduct a trans-lunar injection through the Photon system and employ a propulsion technology to head to a cislunar orbit within three months. The spacecraft will then travel to a near-rectilinear halo orbit to validate its traits and carry out demonstration efforts along with the Lunar Reconnaissance Orbiter system.

Marshall Smith, director of human lunar exploration programs at NASA, said the CubeSat will study the seven-day cislunar orbit being eyed by the agency’s Gateway spacecraft.

CAPSTONE will undergo a final design review effort prior to production and testing efforts by Advanced Space and Tyvak Nano-Satellite Systems. The launch is scheduled to take place in 2021.