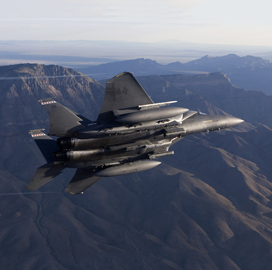 The StormBreaker munition uses a multimode seeker with infrared, semi-active laser and millimeter wave radar guidance technologies that can work alongside GPS and inertial navigation systems to reach targets over 40 miles away from the aircraft, the company said Tuesday.

The seeker technology is built to share data across the system’s three modes to engage a moving or a fixed target.

“The weapon has proven itself in many complex test scenarios, against a variety of targets in extreme environmental conditions, and is now ready to fly,” said Cristy Stagg, StormBreaker program director at Raytheon Technologies’ missiles and defense business.

Raytheon Technologies expects the weapon to be deployed on the U.S. Navy’s F/A-18E/F Super Hornet later this year.

USAF is also integrating the system with the F-35 Joint Strike Fighter, the company added.