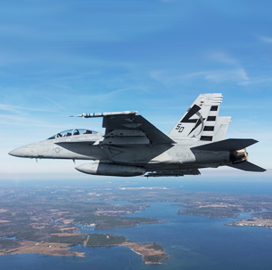 The technology being developed under the Tactical Combat Training System Increment II program is intended to connect an aircraft with other platforms such as ground systems, sensors or air vehicles to help pilots train in simulated, highly contested battle areas, Collins Aerospace said Monday.

The maiden flight of the training platform will be considered for the decision on the program's entry to the production stage. Collins Aerospace expects to receive a milestone C approval for the program within the year.