The unmanned aerial vehicle then used an onboard autonomy framework developed by Aurora Flight Sciences, a subsidiary of Boeing, to validate the commands and execute the tasks autonomously. 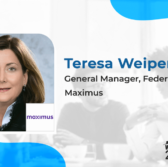