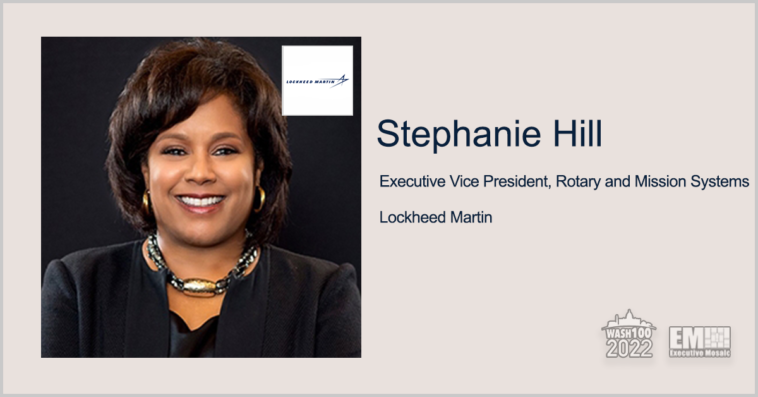 Executive Mosaic is honored to present Stephanie Hill, executive vice president of rotary and mission systems segment at Lockheed Martin, as a 2022 Wash100 Award recipient for driving business growth through major contracts with the U.S. military and foreign allies as well as advancement of engineering and all-domain capabilities.

This marks the second consecutive year and the third time Hill has won the Wash100 Award. Her inclusion in the 2021 class was in recognition of her efforts in advancing military capabilities and driving business growth and sales.

Visit Wash100.com to vote for Stephanie Hill as one of the most significant leaders who will influence the GovCon industry in the coming year. Cast your 10 votes to advocate for your favorite individuals in the public and private sectors.

Under Hill’s leadership, Lockheed RMS’ net sales increased by 5 percent to $794 million in 2021 while its operating profit recorded an 11 percent hike to $183 million in the same year. The growth in figures was mostly credited to Sikorsky helicopter programs that experienced higher production volume.

2021 also saw Lockheed RMS securing multimillion contract awards from the Department of Defense and its components. In the first quarter of the year, the company was awarded a potential five-year, $750M U.S. Navy contract for updating Aegis Combat Systems used by foreign military clients, as well as a one-year, $93.2 million contract modification from the same service branch for maintaining combat management technology integrated into Freedom-class littoral combat ships.

Three more contracts from the Navy were awarded to Lockheed RMS over the year including a $191.2 million contract for manufacturing inertial navigation systems for the Trident II submarine-launched missiles, and a $231.4 million contract modification for providing more MK41 Vertical Launching System modules for the Arleigh Burke-class destroyers and Constellation-class frigates. The other one is a $117 million systems supply contract.

Lockheed RMS, in addition, works with the Missile Defense Agency on the continued development and support activities for Japan’s Aegis combat systems under a $90.8 million contract modification.

Aside from contract awards, the company also announced its plans to expand its Moorestown facility and hire more engineers by 2023 in support of its aim to relocate the Vertical Launching Systems production from Maryland to New Jersey.

Commenting on the move, Hill highlighted Lockheed’s history in the state. “And that history will continue as we look to the future. We’re committed to growing our economic impact through the expansion of our Moorestown operations and the continued investment in high-technology jobs that support vital national security programs.”

In a National Defense commentary, Hill underscored the increasing demand for multi-skilled and flexible engineers amid the rapidly changing threat and national security landscape.

She pointed out the need for programs offering hands-on training from mentors who are also specialists in those in-demand skills for engineers. “This has been an effective method of upskilling, particularly in the areas of cyber, DevSecOps, program management and data analytics, and works best at all career levels,” she added.

Hill also participated in a Q&A session with Breaking Defense to discuss the service branches’ Joint All-Domain Operations and how Lockheed applies AI and ML to enable it and ensure optimized military safety, performance and situational awareness across domains.

“We are tying current core programs to future franchise opportunities by focusing on four key AI areas that include: battle management command and control for cognitive battle management; ISR for decision-making; AI supporting autonomous mission systems; and training and sustainment for real-time mission integration across platforms and predictive health and maintenance.”

In another JADO-focused discussion, Hill shared how the company is advancing its capabilities to support the military’s goal of enabling synchronized lethal and non-lethal effects in every domain.

“Together, we are building a distributed network of the virtualized Aegis weapon system C2 nodes to assist the warfighter in coordinating digital force orders,” she said.

Hill continues to oversee a $16 billion enterprise with a 35,000 global workforce. The RMS portfolio delivers helicopters, defense systems, electronic warfare and C4ISR capabilities as well as other products and services to the U.S. military and customers in intelligence, civil, commercial and international sectors.

Executive Mosaic congratulates Stephanie Hill and the Lockheed RMS team on their selection to receive the 2022 Wash100 Award. 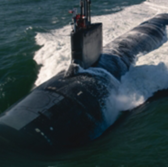 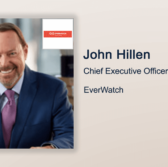